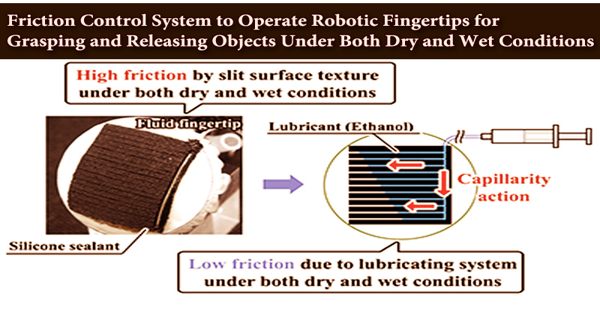 Industrial robots are now widely employed and important in a variety of industries, including automobile manufacture. Traditional robot hands are best for handling hard, definite-shaped objects; however, holding intricate objects or softly holding soft ones is challenging. It’s also crucial to respond to physical features of things under various conditions, such as surface qualities (dry, wet, etc.).

Because the contact area can be extended by surface deformation in response to the object form, a soft-surfaced fingertip of a robot hand can grasp an object of complicated form quite readily. Soft-surfaced fingertips are excellent for handling soft items, including tofu. Soft materials, on the other hand, have high surface friction, which makes releasing them more difficult. It’s also tough to move objects into desirable locations, especially while working in a small space.

The previously constructed robot fingertips feature a high friction texture that can firmly grab a paper box or a soft object in both dry and wet environments. The grasped object sank downhill without changing the position of the robot’s fingertips after injecting a lubricant (absolute ethanol). The current lubricant-based control method is suitable for robot duties in confined spaces. Prof. Tetsuyou Watanabe’s group at Kanazawa University has been researching control technologies for grabbing objects with robot hands’ fingers.

The group’s goal in this work was to create a friction control system. The team grasped objects with the soft fingertips of a robot hand, then released them by administering (injecting) lubricant. Absolute ethanol (>99.5%) was used as a lubricant in this investigation because it is chemically safe, quick to dry, and has low surface tension.

Because the contact area can be increased by surface deformation according to the object form, a robot hand’s soft-surfaced fingertip can be deformed and can handle an object of intricate shape rather easily. Soft-surfaced fingertips can grip soft objects so well that they can even hold tofu. Soft materials, on the other hand, have high surface friction, making releasing more difficult. Furthermore, letting go of objects to needed locations is challenging, especially in instances where working space is limited.

To develop a “fluid fingertip,” a nitrile rubber film was glued to the sides of the fingertip foundation to provide a space for filling with a chain saw oil. The rubber sheet was then coated with a silicone “texture”; the “texture” was made of a silicone sealant with 1.5 mm slits running perpendicular to the load direction. The slots were included to allow for high friction and lubricant diffusion while the surface was wet. Objects made of various materials used for kitchen utensils were grabbed with this fluid fingertip, and it was confirmed that the friction was minimized after applying the lubricant. Friction was reduced in both dry and wet situations, but there was no similar lubricating effect in an oily condition.

After that, a simulation of a box packing task was performed. From either side, two-fluid fingertips grasped a paper package. Each fluid fingertip was linked to the previously mentioned “texture.” Placing a weight on the paper box demonstrated stable clutching. After removing the weight, lubricant was supplied to both fluid fingertips, resulting in the paper box falling downward in a short amount of time (less than 2.5 seconds), completing the paper box packaging job. As seen here, a high-friction “texture” was bonded to the fluid fingertip, and the friction was reduced by infusing a lubricant (here, 100% ethanol). By regulating the friction without moving the fingertips, an object might be released and placed in the desired position.

The use of an appropriate lubricant controlled object grabbing by soft surface fluid fingertips with high friction in this investigation. However, more experiments under diverse situations are required before the existing regulating technique can be used to manufacturing environments. Nonetheless, this discovery is likely to be a step forward in automating tasks such as gripping and releasing things in a constrained environment.

Texture refers to the feel of woven textiles, rocks, meals, and other objects. Texture refers to a planar substance that is bound to a foundation and comes into touch with a target material.