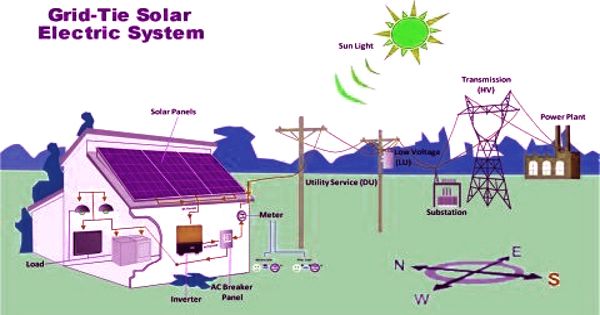 A grid-tied electrical system also called the grid-tie system, is a semi-autonomous electrical generation or grid energy storage system which links to the mains to feed excess capacity back to the local mains electrical grid. Such a system generates power for the home and it feeds any excess power it generates into the grid. When insufficient electricity is available, electricity drawn from the mains grid can make up the shortfall. The amount of power it feeds into the grid can slow down the home’s electric meter as it measures usage. It can often make the meter go backward. Conversely, when excess electricity is available, it is sent to the mains grid. That excess power actually causes the homeowner’s meter to spin backward. When the meter “spins backward” it means that electricity is being fed into the grid. When the Utility or network operator restricts the amount of energy that goes into the grid, it is possible to prevent any input into the grid by installing Export Limiting devices. Grid-tied solar is currently the most popular type of home solar power system on the market.

When batteries are used for storage, the system is called battery-to-grid (B2G), which includes vehicle-to-grid (V2G). The main advantage of this system is that it has a shorter payback compared to the lifespan of an off-grid system. A grid-connection will allow you to save more money with solar panels through better efficiency rates, net metering, plus lower equipment and installation costs. The electric power grid is in many ways also a battery, without the need for maintenance or replacements, and with much better efficiency rates.

Electricity has to be spent in real-time. However, it can be temporarily stored as other forms of energy (e.g. chemical energy in batteries). Energy storage typically comes with significant losses. Direct Current (DC) electricity from sources such as hydro, wind, or solar is passed to an inverter that is grid-tied. The inverter monitors the alternating current mains supply frequency and generates electricity that is phase-matched to the mains. Grid-tied renewable electrical systems work by generating power when nature provides the opportunity and using it or banking it for later use. When the grid fails to accept power during a “blackout”, most inverters can continue to provide courtesy power.

There are a few key differences between the equipment needed for grid-tied, off-grid, and hybrid solar systems. Standard grid-tied solar systems rely on the following components: