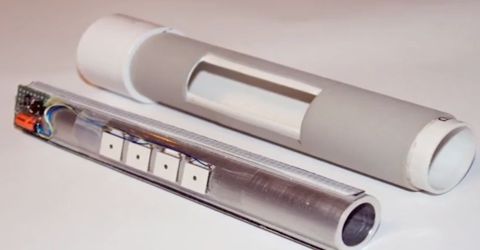 The human body, at any given moment, produces energy equivalent to 100 watt light bulb. We are wasting our energy; energy that can be used to power a light bulb. It’s this line of thinking that led a 16 year old to invent the first flashlight powered entirely by body heat. HOLLOW FLASHLIGHT is a device that harvests energy from the human hand to power itself.

Idea: Ann Makosinski is a 16-year-old student who competed aligned with thousands of other young inventors from around the world to win first prize and a $25,000 scholarship at Google’s International Science Fair.

She invented a battery-free flashlight. A free energy device that is powered by the heat in your hand. Principle: The thermoelectric effect is the direct change of temperature differences to electric voltage and vice versa. A thermoelectric device creates voltage when there is a dissimilar temperature on each side. Conversely, when a voltage is applied to it, it creates a temperature variation. At the atomic scale, an applied temperature gradient causes charge carriers in the material to diffuse from the hot side to the cold side.

The Peltier effect is the presence of heating or cooling at an electrified junction of two different conductors. When a current is made to flow through a junction between two conductors A and B, heat may be generated (or removed) at the junction.

Model: Peltier tiles were mounted on a hollow aluminum tube that had been inserted into a PVC pipe. A spot was cut on the PVC tube where the hand could warm the tiles, while ambient air from the PVC tube cooled the other side of the tiles. The result was a flashlight that could shine for more than 20 minutes if the outside temperature was more than 5 degrees Celcius (about 34 degrees Fahrenheit). Flashlight work well when the variation between the ambient temperature and body temperature is greater. So while the flashlights worked with an air temperature of 10°C (50° F), they emitted more light with the air temperature at 5°C (41° F). It is capable to maintain a steady beam of light for 20 minutes, even in the warmer temperature.

For Better Working; Only needs a five degree temperature difference to work and produce up to 5.4 mW at 5 foot candles of brightness. Harvesting energy, like with this flashlight, can provide a lot of potential for powering small devices without essentially having to have batteries We use an enormous amount of batteries,” said Albin Gasiewski of the Center for Environmental Technology. “Most of them are not rechargeable and end up in landfills.” Hollow Flashlight could make a difference.

Researchers look into ways to capture excess body heat as a means of powering devices like hearing aids and pacemaker.

The flashlight uses 4 Peltier tiles to convert the temperature difference (between body and room temperatures) into energy. One side of the tiles is heated by our body heat and the other side is at room temperature. This temperature variation creates electricity using the thermoelectric effect. The tiles used for this light need a least of 5 degree variation of temperature to work.

The amount of potential difference produced depends on the material. Peltier tiles are great because they are compact and they do not use any moving parts. Elimination of any moving parts eliminates wear and tear. They last long and do not need a lot of maintainance. However, their efficiency is not so great. So, they are used only where long life is essential.

The Voyager space probe and other deep space probes, where long life is of prime importance, use Thermoelectric generators (another image). The heat there is produced by a radioactive isotope. Implanted pacemakers which require long life also use it as a source of energy. All of them work utilizing the same effect – thermoelectric effect. The eco-fan, a wood stove fan, also uses the same effect in a very creative way.