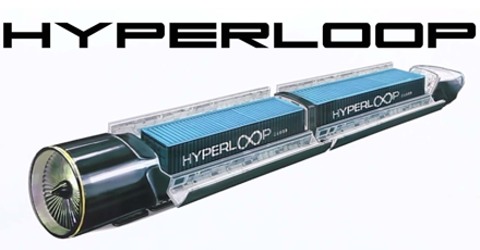 Hyperloop The Next Big Thing In Transportation Hyperloop is a tube-based transportation system for inter and intra-city transport. With a drastic reduction of air in the tube, motion is achieved with nearly zero friction allowing passengers to safely accelerate to airplane speeds. This is all powered by a combination of alternative energy and energy conservation systems.

The Hyperloop concept was put forth by Elon Musk, CEO the aerospace firm SpaceX, who wants to revolutionize the transport system of the present world. He initially called the hyperloop as the “Fifth Mode of Transport” and wanted to develop a transportation system immune to weather,the ability to store energy for 24-hour operations and attain an average speed twice that of a typical jet.

Musk’s Hyperloop consists of two massive tubes stretching between San Francisco and Los Angeles. Pods carrying passengers would travel through the tubes at speeds topping out over 700 mph. Imagine the pneumatic tubes people in The Jetsons use to move around buildings, but on a much bigger scale. For propulsion, magnetic accelerators will be planted along the length of the tube, propelling the pods forward.  The tubes would house a low pressure environment, surrounding the pod with a cushion of air that permits the pod to move safely at such high speeds, like a puck gliding over an air hockey table.

Given the tight quarters in the tube, pressure buildup in front of the pod could be a problem. The tube needs a system to keep air from building up in this way. Musk’s design recommends an air compressor on the front of the pod that will move air from the front to the tail, keeping it aloft and preventing pressure building up due to air displacement. A one way trip on the Hyperloop is projected to take about 35 minutes (for comparison, traveling the same distance by car takes roughly six hours.) From late 2012 until August 2013, a group of engineers from both Tesla and SpaceX worked on the conceptual modelling of Hyperloop. An early system design was published in to the Tesla and SpaceX blogs. Musk has also invited feedback to “see if the people can find ways to improve it”. The Hyperloop will be an open source design. The following day he announced a plan to demonstrate the project.

A startup in Los Angeles called Hyperloop One, formerly known as Hyperloop Technologies, was incorporated in June 2014 and has since raised $160 million and built a team of 200 engineers and technicians to bring a complete autonomous transport system to market. It has feasibility studies underway in Dubai, Finland, Russia, Los Angeles and Switzerland.

Hyperloop One engineers have modified several key technical elements of Musk’s original design, including replacing the air bearings with passive magnetic levitation and eliminating the compressor.

In June 2015, SpaceX announced that it would build a 1-mile-long (1.6 km) test track to be located next to SpaceX’s Hawthorne facility. The track would be used to test pod designs supplied by third parties in the competition. A crowdsourced operation called Hyperloop Transportation Technologies claimed in early 2016 that it would begin construction later in the year of a 5-mile (8 km) Hyperloop test track in Quay Valley but it has yet to receive the permits or even begin its environmental review process.

Conventional means of transportation (road, water, air, and rail) tend to be some mix of expensive, slow, and environmentally harmful. Road travel is particularly problematic, given carbon emissions and the fluctuating price of oil. As the environmental dangers of energy consumption continue to worsen, mass transit will be crucial in the years to come.

Rail travel is relatively energy efficient and offers the most environmentally friendly option, but is too slow and expensive to be massively adopted. At distances less than 900 miles, supersonic travel is unfeasible, as most of the journey would be spent ascending and descending (the slowest parts of a flight.) Given these issues, the Hyperloop aims to make a cost-effective, high speed transportation system for use at moderate distances. As an example of the right type of distance, Musk uses the route from San Francisco to L.A. (a route the high-speed rail system will also cover). The Hyperloop tubes would have solar panels installed on the roof, allowing for a clean and self-powering system.

The Hyperloop Competition and Development Elon Musk postulated the idea, SpaceX is not developing a commercial Hyperloop of its own. Instead, it is holding a competition to encourage students and engineers to develop prototype pods. To facilitate this, SpaceX has built a one mile test track in California. According to the contest guidelines, entrants will first submit their designs and receive feedback from SpaceX engineers. In June 2016, applicants will bring their completed pods and test them on SpaceX’s Hyperloop test track in what will likely be the most impressive soapbox derby ever.

While the contest is sure to attract engineering prodigies, the Hyperloop concept has also garnered interest from businessmen. Startups such as Hyperloop Transportation Technologies (HTT) and Hyperloop Technologies (HT) are working Hyperloop systems, and what they lack in clever naming they make up for in ambition.

On January 30, 2016, the SpaceX Hyperloop design competition concluded. More than 100 prototype pod designs were submitted, and 22 teams have won the chance to test their designs on the SpaceX Hyperloop test track in June 2016. A team of grad students from the Massachusetts Institute of Technology (MIT) won Best Overall Design. According to the MIT team, the pod is lightweight and emphasizes speed and safety, including a fail-safe brake system. Whereas many Hyperloop designs use air jets to levitate, the MIT design uses two arrays of neodymium magnets to keep the pod aloft. Additional magnets inside the pod will keep it stable as it races along the track. The power of the prototype is impressive, though, it’s still very far from a commercial product given it currently lacks space for passengers or even cargo. The students have until June to tinker with the design, and the next phase of the project could be a great step forward. Some critics of Hyperloop focus on the experience—possibly unpleasant and frightening—of riding in a narrow, sealed, and windowless capsule inside a sealed steel tunnel, that is subjected to significant acceleration forces; high noise levels due to air being compressed and ducted around the capsule at near-sonic speeds; and the vibration and jostling. Even if the tube is initially smooth, ground may shift due to seismic activity. At speeds approaching 900 ft/s (270 m/s), deviations of 0.04 in (1 mm) from a straight path would add considerable buffeting and vibration, with no provisions for passengers to stand, move within the capsule, use a restroom during the trip, or get assistance or relief in case of emergency or motion sickness. This is in addition to the obvious practical and logistical questions regarding how to best deal with equipment malfunction, accidents, and emergency evacuations.

Some experts are skeptical, saying that the proposals ignore the expenses and risks of developing the technology and that the idea is “completely impractical”. Claims have also been made that the Hyperloop is too susceptible to disruption from a power outage or being completely destroyed by a simple terror attack to be considered safe.