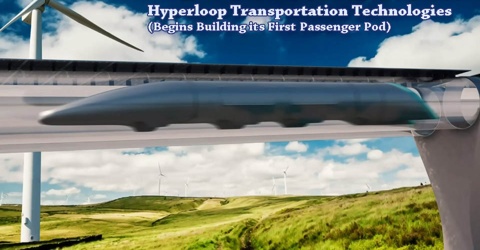 Hyperloop Transportation Technologies on Tuesday, 21 March 2017 announced a key move in its own progress toward that goal: It has begun construction on its first full-scale passenger capsule, to be completed and revealed in 2018. HTT says that the craft will be tested and tweaked at its Toulouse HQ, ready to run in the first “commercial” Hyperloop system that the company expects will be announced in the near future. It’s being made for HTT by construction partner Carbures S.A., a firm that builds parts and whole systems for use in aeronautics, defense, space and more. The announcement also reveals the specifications of the new travel capsule, which will be 30 meters long and 2.7 meters wide. Weighing 20 tons, the vessel is expected to carry between 28 and 40 passengers at a time. Finally, executives are boasting that the craft’s top speed is 760 miles an hour, bumping close to the sound barrier, which is 767 miles an hour.

The capsule’s not just being built to show that HTT can make it a real thing; it’s destined for use in a commercial system that the company says it’ll announce soon, one sprung from its many negotiations ongoing with various potential clients, which also include feasibility studies to help find out where in the world it makes the most sense to build a real Hyperloop capable of transporting people at very high speeds over great distances down a near-vacuum tube.

It’s hard to make a direct comparison, since Hyperloop is closer to flying than the traditional passenger railway network. That said, a long-distance route like Amtrak’s Acela Express offers some sense of the difference in scale between the two technologies. A typical Acela Express carriage, for instance, has a capacity of 65, is 26 meters long and weighs around 63 tons. Specifications of the Hyperloop Passenger Capsule

The specifications of the HTT capsule have also been announced. It is nearly 100 feet long and nine feet wide, and can accommodate from 28 to 40 people depending of seating arrangements. It weighs 20 tons and the planned top speed is 760 miles per hour. Once HTT’s system is in place, the company claims each capsule should be able to handle up to 164,000 passengers a day.

HTT also known as Hyperloop Transportation Technologies, is an American research company formed using a crowd collaboration approach a mix of team collaboration and crowdsourcing to develop a transportation system based on the Hyperloop concept, which was envisioned by Elon Musk in 2013. The company was founded by JumpStarter, Inc., utilizing the company’s crowdfunding and collaboration platform JumpStartFund. The company has assembled a team of community members, attracting high level engineers and contributing corporations including Ansys for computer simulation resources and GloCal Network Corporation and UCLA Architecture & Urban Design for developing the social interface for the Hyperloop project. By February 2015, the company had grown to nearly 200 people, and had announced that it would hold an initial public offering that year to raise US$100 million. HTT also entered a formal agreement with GROW Holdings, the developer of Quay Valley, California, to construct a 5-mile (8 km) demonstration track beginning in 2016. By November, HTT had grown to just under 500 people.

In 2016 the CEO, Dirk Ahlborn, announced an agreement with the Slovakian government to perform feasibility studies regarding routes connecting Vienna, Austria to Bratislava, Slovakia, and Bratislava to Budapest, Hungary. Total costs for this project are estimated to be US$200–300 million. The resulting annual system capacity is projected to be 10 million passengers. HTT announced in March of 2016 that they would be using passive Inductrack systems for their titular Hyperloop. HTT isn’t the only Hyperloop company working to bring the high-speed transportation concept to fruition: competitor Hyperloop One recently showed off the construction of its test tube in the Nevada desert following a demonstration of its propulsion system last year. One of the company’s ousted founders, Brogan BamBrogan, started a new Hyperloop project called Arrivo last month.