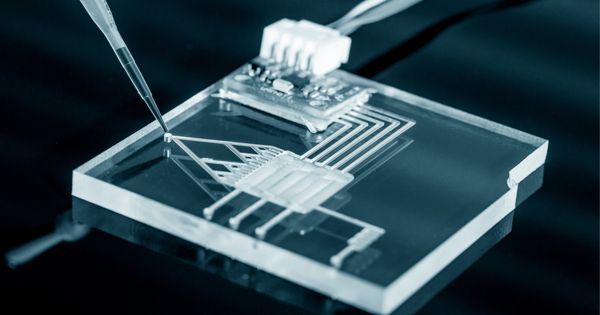 A lab-on-a-chip (LOC) is a miniaturized device that integrates into a single chip one or several analyses, which are usually done in a laboratory; analyses such as DNA sequencing or biochemical detection. LOC is a device that integrates one or several laboratory functions on a single integrated circuit (commonly called a “chip”) of only millimeters to a few square centimeters to achieve automation and high-throughput screening. It provides a unique forum for the publication of significant and original work related to miniaturization, at the micro and nano-scale, of interest to a multidisciplinary readership.

Research on lab-on-a-chip focuses on several applications including human diagnostics, DNA analysis, and, to a lesser extent, the synthesis of chemicals. Lab-on-a-chip devices are a subset of microelectromechanical systems (MEMS) devices and sometimes called “micro total analysis systems” (µTAS). The miniaturization of biochemical operations normally handled in a laboratory has numerous advantages, such as cost efficiency, parallelization, ergonomics, diagnostic speed, and sensitivity.

Lab-on-a-chip provides a whole new world of opportunities for DNA & RNA sequencing. Most of the research on LOC technology so far has focused on its applications in the field of diagnostics such as its use in diagnostic devices in medical offices or at sites that have limited or no access to laboratory facilities. The first human genome projects took years and required the work of hundreds of researchers to the sequence. Today, using lab-on-a-chip to integrate an array of DNA probes, we are able to sequence genomes thousands of times faster.

LOCs may provide advantages, which are specific to their application. LOC technology enables the use of small fluid volumes which helps cut costs and the analysis of reagents and response time.

The most prominent disadvantages of labs-on-chip are:

LOCs may use microfluidics, the physics, manipulation, and study of minute amounts of fluids. A lab-on-a-chip is a class of devices that integrates and automates multiple laboratory techniques into a system that fits on a chip up to a maximum of a few square centimeters in size. The term “lab-on-a-chip” was introduced when it turned out that µTAS technologies were applicable for more than only analysis purposes. This helps achieve high-throughput screening and automation.