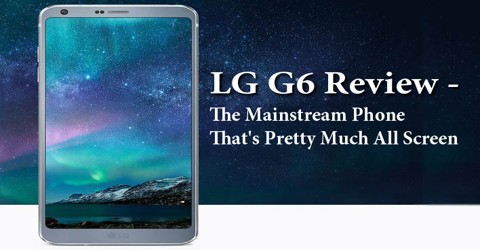 LG’s flagship phones have, for the last few years, pinned their success on standout features. The LG G3 introduced quad-HD displays, the G4 shipped with quirky leather backs, and last year’s G5 went with a modular design. For the G6, LG is focusing on cramming a large display in a small body.

The LG G6 is a much more conservative design than its predecessor, taking the form of a sealed unit that drops the removable battery, replacing it with a larger-capacity power pack and waterproof shell. The screen is, really, the only place where innovation is still present; with the longer 18:9 display giving more screen real estate to play with, and introducing some clever little changes to the user interface to exploit the extra pixels. Beyond that, there’s not a lot that marks out the LG G6 from the rest of the competition – and that’s a pretty good thing.

As mentioned, LG needs a win, and having spent years trying to find the silver bullet that would bump it to the front of the pack a QHD screen, leather-backed phones, modular design, to name a few attempts, here it’s followed the patterns set by Apple, Samsung and HTC to create something consumers actually want.

That means a more stable platform to let its performance shine through the larger display, dual cameras and improved screen technology.

The LG G6 will first go on sale in South Korea on March 9th, with other regions to follow later. The phone will most likely hit the US and other markets sometime in late March or April, but we’ll update this page once we have official confirmation on that end.

The LG G6 is covered in a mix of glass and metal, with two sheets of Gorilla Glass (although weirdly it’s Gorilla Glass 5 on the rear, but only Gorilla Glass 3 on the front) framed with a rim of aluminum. Anyone aware of the LG G5’s design will be surprised by the way of just how … normal this phone looks. Gone is the dull plastic back of the LG G3, the odd leather of the G4 or the come-apart design of last year’s phone – the LG G6 is smooth and classy all the way around.

That will disappoint those who like the way LG has taken things in a different direction in the past, but honestly, the G6 design is a smart move. It’s the most classically understated and sophisticated phone we’ve ever seen from LG and it’s the perfect platform for letting the internals shine through.

Just like the G5, the G6 has two sensors sitting next to each on the rear of the device. One is your typical camera; 13 megapixels, OIS, f/1.8 aperture; the other has a much wider field of view. LG has worked with Qualcomm to pluck some of the dual-camera smarts from the 835 CPU to implement them here in the 821. This results in a much smoother process when switching sensors, giving the feel of a single camera. It works, too, although there remains a noticeable change in colour temperature when you switch. The wider-view camera is also much worse in low light, leaving you with very noisy photos. The standby switch, with a fingerprint pad tucked inside, can still be found on the rear of the handset. However, unlike many phones that use capacitive pads, this switch actually depresses and offers decent feedback. Just below the camera is the perfect place for a fingerprint sensor, simply because it’s where user’s finger naturally rests when they pick up a phone. The LG G6 will be coming in platinum, black and white at launch, although it was strongly hinted to us that more colors will be popping up soon.

At the bottom of the phone is the single speaker next to the USB-C connector – and LG has kept the headphone jack at the top, declining to bow to the industry trend of dropping the connector as it seeks to keep more traditional fans happy. It’s been increased to 3300mAh within the slimmer 7.9mm frame – and it’s the right move. The need for removable power packs is almost dead thanks to the proliferation of portable battery chargers, but its V-series phones (such as the LG V20 launched last year) keep the option for now. MicroSD support still exists, with the up-to-2TB expansion option thrust into the SIM tray, and complementing the 32GB of onboard storage. The corners are even curved to keep the aesthetic of the handset, rather than the sharp design most phones pack. It’s an interesting move, but doesn’t really add much more than novelty.

Rather than the typical 16:9 aspect ratio seen on almost every other smartphone, LG opts for an 18:9 ratio display that provides a taller display in a smaller body. The 5.7-inch display – a sizeable increase from the 5.2-inch panel of the G5 – sits inside a shell that’s barely bigger than its predecessor and noticeably smaller than the 5.5-inch iPhone 7 Plus and Samsung Galaxy S7 Edge. One side effect of cramming a bigger screen into a shell of this size is that the corners of the panel are now rounded, rather than right angles. While a little odd at first, but user quickly became used to it. It matches the overall curviness of the phone; but it looks best on the black model. On my white review unit, the black border between the panel and bezel is fairly prominent, and the corner curves aren’t perfectly circular. It’s a small issue, but once you’ve noticed it, it’s hard to forget.

The LG G6 is running Android 7.0 Nougat, with the latest version of LG’s UI on top. The updated user interface features a refreshing new look with natural and vivid colors which can be seen throughout many of the apps and the included set of wallpapers. Due to the unique screen size, LG found it could basically divide the interface into two grid squares (2:1 aspect ratio) that come together seamlessly, and so you’ll notice this ‘grid-like’ setup in a lot of LG’s apps. LG has also updated icons for better uniformity, rounded corners for its background folders, and other small touches that make the UI stand out just a little bit more. LG also made quite a few changes to its camera app. This is another one of LG’s apps that have been updated to take advantage of the 2:1 aspect ratio. LG has used the extra horizontal space available to offer previews of multiple shots that you’ve taken, instead of the single latest one that is available with most other camera apps. LG also took the opportunity to throw in a manual mode for video in the camera app this time around.

This handset hasn’t seen the same level of improvement on the inside as the G5, but it remains a very fast phone indeed; and even on the pre-production software, user haven’t encountered any issues. As was heavily rumoured, the LG G6 uses last year’s Snapdragon 821 CPU – looks like Samsung did snap up those initial runs of the 835 – with 4GB of RAM and 32GB of basic storage. There’s a microSD slot, but I’d have much preferred to see 64GB as the starting point. The 821 is a great processor, with plenty of oomph and good efficiency. We don’t really yet know all the benefits of the 835 in day-to-day use, but it’s still a shame not to see the latest silicon here, especially if this phone is going to retail at the same price as the Samsung Galaxy S8.