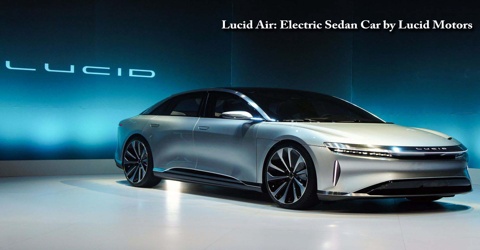 Launching an electric car company seems like the go-to folly of today’s billionaires, but Lucid Motors wants to be more than just a vanity project of its well-heeled backers.

The Air is significantly less expensive than the Model S 60, especially at the base level, where the Model S starts around $80,000. They have a similar per-charge range, with the Air expected to have 240 miles and the Model S 60 at 210 miles, as rated by the EPA. They also have similar storage space in two trunks — front and rear — with 32 cubic feet combined in the Air and 31.6 cubic feet in the Model S. Now the Lucid Air will start at $60,000, before applying the federal tax credit that’s available for electric vehicles, people are going to start comparison shopping. The first competitor that springs to mind is that other all-electric luxury sedan, the Tesla Model S.

Lucid plans to build 10,000 cars in its first year of production, which will take place in Casa Grande, Arizona. Prototype cars have had most of the technology in place, but not the refined interior design and state-of-the-art infotainment systems luxury buyers expect. A top-notch interior will be a requirement for any buyers who are toying with the idea of crossing over from a century-old sports luxury brand to a new alternative-fuel sedan.

Lucid will design, develop, manufacture and supply battery packs for the Formula E 2018-2019 and 2019-2020 season, in collaboration with McLaren Applied Technologies and Sony. The formula-E specification calls for a battery weight of 250 kg (551 pounds), 54 kWh energy, and peak power of up to 250 kW. Lucid mainly developed battery technology in the early years, but began making an aluminium prototype car in 2014. Originally teased as the “Atieva Atvus”; it was unveiled as the “Lucid Air” in December 2016 and available about 2 years later. It has a 400 hp front motor and a 600 hp rear motor for a combined 900-1,000 hp. Lucid has agreed with Mobileye to use their EyeQ4 chips and 8 cameras for driver assist features. Parts of the media view Lucid’s 2018 production plans as difficult.

Electrification offers an unparalleled driving experience that is responsive to the needs of the driver, the passengers, and the road. The entire vehicle, including our proprietary powertrain system, has been finessed to deliver world-class performance in acceleration, driving range, and efficiency. Taking a unique approach to the drivetrain, the Lucid motor and transmission have been designed as a truly integrated system. Entirely developed in-house, the resulting solution is smaller, more efficient and more power-dense than competitors, while potentially more reliable. Improving energy efficiency by up to 50% compared to conventional LED headlights, our ultra-slim lighting system mimics insect eyes by utilizing literally thousands of micro-lenses. The elegant form of the micro-lens arrays belies the complexity of these self-adjusting headlights, which optimally adapt to each driving situation, adding safety.

Packaging perfection allows us to introduce unprecedented comfort via rear executive seats with up to 55 degrees of recline. This luxury option offers a first-class aircraft seating experience in the back of this car.

Choosing when to drive is a luxury in itself. Autonomous driving and active safety systems both increase convenience and reduce everyday accident risk. Lucid vehicles will be delivered autonomous-ready with a comprehensive sensor suite able to scale to complete autonomy through ongoing software upgrades. Time is precious, so when charging on the go, you can get back on the road quickly. While many batteries age prematurely if fast-charged regularly, you can fast charge a Lucid battery at will without worries.

Competition for other Electric Cars

Lucid Air will start at $60,000, before applying the federal tax credit that’s available for electric vehicles, people are going to start comparison shopping. The first competitor that springs to mind is that other all-electric luxury sedan, the Tesla Model S. The Air is significantly less expensive than the Model S 60, especially at the base level, where the Model S starts around $80,000. They have a similar per-charge range, with the Air expected to have 240 miles and the Model S 60 at 210 miles, as rated by the EPA. Its closest Audi competitor is likely the A7, which starts just under $70,000. It’s got 333 horsepower, which the base model Air betters by 67 horses. It has 24.5 cubic feet of storage space, among the best in its class but far less than the Air. But the A7 has some features that we don’t know if the Air will include, like standard heated seats, navigation, and compatibility with Apple CarPlay and Android Auto.

The BMW 640i starts at around $77,000, with a six-cylinder engine that produces 315 hp. ADAS systems, like active cruise control and pedestrian detection, are optional, though navigation and heated seats are standard on all 6-series models. Its cargo space is average for the class at 16 cubic feet, which seems paltry compared with the EVs.

The Mercedes CLS starts at about $67,000, making it closest in price to the Lucid Air. It’s got 329 hp in the CLS400, so the Air is the clear winner in the power department. Active brake assist is standard in the CLS400, as are Mercedes’s Pre-Safe automatic braking system and Attention Assist, which lets you know when you’re too sleepy to drive. But the CLS is the biggest loser in cargo space, with 15 cubic feet in the trunk — less than half of what you’ll find in the EVs’ two trunks.