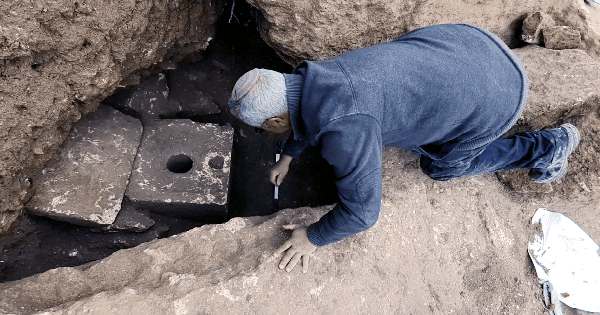 Archaeologists in Israel have discovered a very different kind of royal throne: a very uncommon toilet from the Biblical era, during recent archaeological digs near the Beit Shatz tourism complex at Armon Hanatziv in Jerusalem, the Israel Antiquities Authority unearthed the private toilet. Their research indicates that the toilet used around 2,700 years ago, towards the conclusion of the Kings of Judean period (7th century BCE). In many places of the modern world, toilets are extremely common, but they were extremely rare in the ancient world. Whoever was fortunate enough to sit on this opulent throne was most likely a powerful, privileged, and wealthy individual. In fact, in this ancient culture, having a separate toilet was a real status symbol, reserved for the most exclusive of nobles.

“A private toilet cubicle was extremely uncommon in antiquity, and only a few have been discovered too far, the most of which are in the City of David. Toilets were only available to the wealthy. The Mishnah and Talmud raised various criteria for defining a wealthy person a thousand years later, and Rabbi Yossi suggested that to be wealthy is to be wealthy “In a statement sent to IFLScience, Yaakov Billig, Director of the Excavation on behalf of the Israel Antiquities Authority, said, “to have the toilet next to his table.”

The toilet was discovered among the remnants of a building that formerly overlooked the City of David, the traditional name for Jerusalem’s earliest city, and the Temple Mount, a sacred place revered by Jews, Christians, and Muslims alike. The bathroom consists of a rectangular-shaped chamber with a carved-out-of-limestone sitting toilet. The team discovered a massive septic tank behind the toilet, which contained a collection of antique crockery as well as a number of animal bones. According to the experts, examining the contents of this tank could give vital information about the lifestyle, health, and disease of the time.

The bathroom originally housed dozens of little bowls, according to Israeli publication Haaretz. He thinks these canisters were once used to store aromatic oils or incense, which served as an ancient air freshener. “It’s remarkable to observe how something as basic as toilets was considered a luxury item during the reign of the Judah kings.”Jerusalem never ceases to astonish,” Israel Antiquities Authority Director Eli Eskosido said. “It’s difficult to imagine the spectacular vista.” I am confident that the city’s wonderful past will continue to be disclosed to us in the future, providing us with opportunities to experience and learn about our history.”