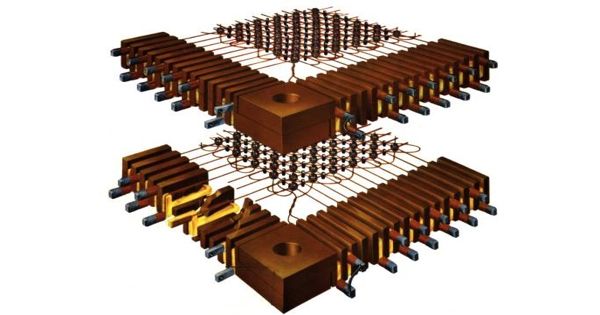 Core memory swiftly swept away competing technologies. Magnetic-core memory was the predominant form of random-access computer memory for 20 years between about 1955 and 1975. Such memory is often just called core memory, or, informally, core. But manufacturing it was a delicate job, entrusted mostly to women using microscopes and steady hands to thread thin wires through holes about the diameter of a pencil lead.

Core memory is a random access memory (RAM) system that was developed at MIT by Jay Forrester in 1951. It was initially very expensive to fabricate but prices dropped as the market developed.

Core memory uses toroids (rings) of a hard magnetic material (usually a semi-hard ferrite) as transformer cores, where each wire threaded through the core serves as a transformer winding. It uses tiny magnetic toroids, the cores, through which wires are threaded to write and read information. Three or four wires pass through each core. Each core represents one bit of information. Magnetic hysteresis allows each of the cores to “remember”, or store a state. The cores can be magnetized in two different ways and the bit stored in a core is zero or one depending on that core’s magnetization direction.

Each core stores one bit of information. The memory consists of an array of ferrite toroids (or cores) that are about 11 miles in diameter. A core can be magnetized in either the clockwise or counter-clockwise direction. A core is required for each bit of memory and has three wires passing through it, providing the means to select and detect the contents of each bit. The value of the bit stored in a core is zero or one according to the direction of that core’s magnetization.

Electric current pulses in some of the wires through a core allow the direction of the magnetization in that core to be set in either direction, thus storing a one or a zero. The wires are arranged to allow an individual core to be set to either a “one” or a “zero”, and for its magnetization to be changed, by sending appropriate electric current pulses through selected wires. Another wire through each core, the sense wire, is used to detect whether the core changed state. The process of reading the core causes the core to be reset to a “zero”, thus erasing it. This is called destructive readout.

Such memory is often just called core memory, or, informally, core. The process of reading the core causes the core to be reset to a zero, thus erasing it. This is called destructive readout. Although core memory had been superseded by semiconductor memory by the end of the 1970s, memory is still occasionally called “core”; in particular, a file recording the contents of memory after a system error is usually called a core dump. When not being read or written, the cores maintain the last value they had, even if the power is turned off. Therefore they are a type of non-volatile memory.