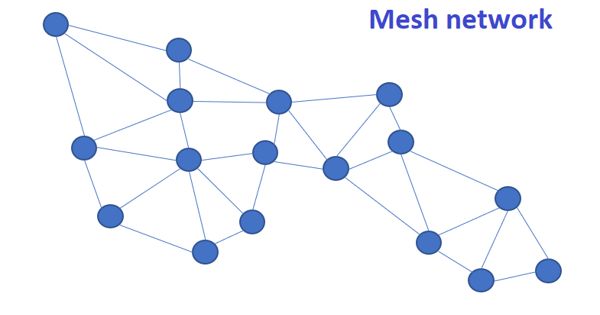 In a mesh network, if one point goes down, communication is simply rerouted through another point. It is a local network topology in which the infrastructure nodes (i.e. bridges, switches, and other infrastructure devices) connect directly, dynamically, and non-hierarchically to as many other nodes as possible and cooperate with one another to efficiently route data from/to clients. Mesh WiFi systems consist of the main router that connects directly to your modem, and a series of satellite modules, or nodes, placed around your house for full WiFi coverage.

They are all part of a single wireless network and share the same SSID and password, unlike traditional WiFi routers. This lack of dependency on one node allows for every node to participate in the relay of information. Mesh networks dynamically self-organize and self-configure, which can reduce installation overhead.

Instead of a device connecting to a single gateway to the Internet, mesh networks are created from multiple nodes that all provide web connectivity. The ability to self-configure enables dynamic distribution of workloads, particularly in the event a few nodes should fail. This in turn contributes to fault-tolerance and reduced maintenance costs. For example, you could have a central ‘hub’ in the kitchen and then have satellite nodes in the home office, kitchen, or bedroom.

One of the advantages of a mesh topology is that (in theory) you don’t need to add routers to the network, as each node can act as a router. Mesh topology may be contrasted with conventional star/tree local network topologies in which the bridges/switches are directly linked to only a small subset of other bridges/switches, and the links between these infrastructure neighbours are hierarchical. Another benefit of a mesh network topology is that if one of the nodes goes down, it doesn’t necessarily bring the entire network down.

Each node needs to both send messages as well as act as a router, which causes the complexity of each node to go up pretty significantly. While star-and-tree topologies are very well established, highly standardized and vendor-neutral, vendors of mesh network devices have not yet all agreed on common standards, and interoperability between devices from different vendors is not yet assured. These advantages and disadvantages aside, you really need to look to the application you’re deploying in order to determine which network topology is ideal for your project.