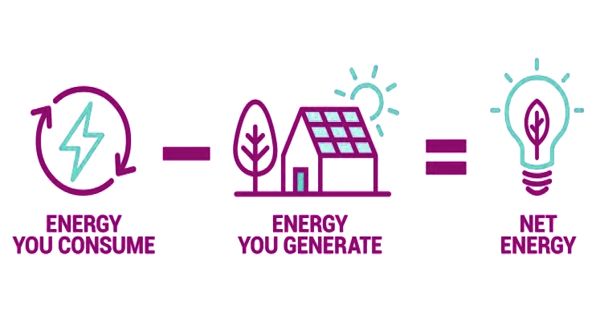 Net metering is a billing mechanism that credits solar energy system owners for the electricity they add to the grid. It is an electricity billing mechanism that allows consumers who generate some or all of their own electricity to use that electricity anytime, instead of when it is generated. It is a solar incentive that allows you to store energy in the electric grid. With net metering, the homeowner is only billed for the “net” energy used each month, that is, the difference between the energy produced by the solar power system and the energy consumed by the house over the monthly billing period. This is particularly important with renewable energy sources like wind and solar, which are non-dispatchable. When your solar panels produce more electricity than you need, that energy is sent to the grid in exchange for credits. It helps you reduce your monthly electric bill with the energy generated by your own private rooftop solar energy system.

Monthly net metering allows consumers to use solar power generated during the day at night, or wind from a windy day later in the month. At night or other times when your solar panels are underproducing, you pull energy from the grid and use these credits to offset the costs of that energy. Annual net metering rolls over a net kilowatt-hour (kWh) credit to the following month, allowing solar power that was generated in July to be used in December, or wind power from March in August. Solar energy systems typically hit peak electricity production in the afternoon, when many people aren’t home using electricity. 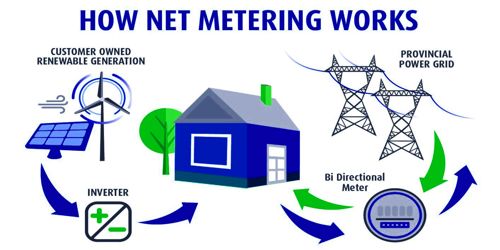 Net metering’s cost-shift starts with how utilities charge customers for their electricity and services. Net metering policies can vary significantly by country and by state or province: if net metering is available, if and how long banked credits can be retained, and how much the credits are worth.  Even though the costs a utility faces come from multiple sources, they largely collect their revenues from total sales. Most net metering laws involve monthly roll over of kWh credits, a small monthly connection fee, require a monthly payment of deficits (i.e. normal electric bill), and annual settlement of any residual credit. Net metering uses a single, bi-directional meter and can measure the current flowing in two directions. Net metering can be implemented solely as an accounting procedure and requires no special metering, or even any prior arrangement or notification.

Net metering is an enabling policy designed to foster private investment in renewable energy. It is a utility billing mechanism available in most states that offers a credit to residential and business customers who are making excess electricity with their solar panel systems and sending it back to the grid.