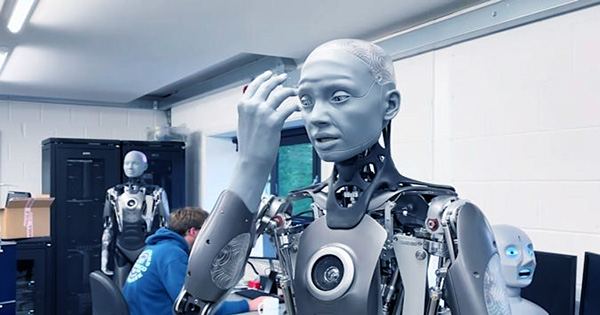 Engineered Arts, a UK robotics business, has debuted the “world’s most sophisticated human-shaped robot” in a video, and it is truly fantastic. America, the robot, has some of the most believable facial expressions to yet, replete with synthetic muscle motions and delicate motor controls that previously only be replicated by humans.

Ameca is now a test platform for expression innovation, but the goal is to pair the robot form with onboard AI so that it can interact with and respond to the person speaking to it, as well as understand their facial emotions. The humanoid was created as an open platform for software development and hardware upgrades, as well as a non-screen “alternative interface” to the digital world.

In an email to IFLScience, Engineered Arts says, “Instead of gazing at screens and typing on keyboards, we should be able to engage with our technology in more human ways – machines could recognize a grin, ahead movement, or a hand gesture.” “For robots to communicate with us, they need faces and hands because it’s so much more natural and easier to comprehend.”

Instead, Ameca might one day work as a robotic front-of-house staffer or engage with event attendees. While development on the Ameca iteration in the video is still underway and will be for the near future, it is currently available for purchase and event rental. There was undoubtedly a mixed reception when Ameca launched into the public. Some people were awestruck and surprised by how genuine the facial expressions were, while others felt quite uneasy.

Engineered Arts, on the other hand, is not stopping there; America is only one of the numerous robots they make for a range of duties. Mesmer is a multilingual, customisable robot that can accurately mirror your gestures; Quinn is a talking head built to manage clients professionally; and Robothespian is a bilingual, customisable robot that can attract consumers during an event. Even for movies, the crew designs bespoke robots.