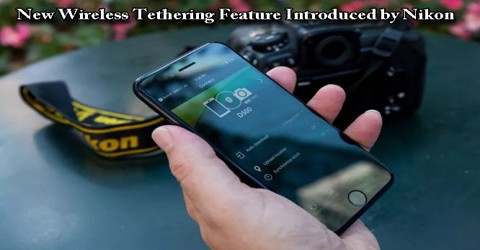 Wi-Fi is available for Nikon’s pro digital cameras (D4 series, D3 series, D800 series, D700 series and D300 series) as photojournalists and other pros need a way to get their images from the camera to their picture editor or wire service so they can be posted online shortly after being captured.

Today’s, high quality Nikon DSLR images at world events such as presidential inaugurations and other newsworthy happenings, the Olympics and other big sporting events are posted online by news organizations mere minutes after photographers are taking photographs. Snapbridge is Nikon’s way of using Bluetooth Low Energy to establish an always-on connection between user’s camera and their phone. It’s an evolution of the idea of a Wi-Fi-connected camera, and it’s fantastic. In fact, it’s so good that Snapbridge makes every other solution for connecting user’s phone to a camera feel archaic. It’s really that much faster and more reliable than methods used by other camera makers. It’s not flawless — the initial connection process is buggy, and if they ever lose the connection with their phone they have to deal with the headache of unpairing and repairing the two devices. But when Snapbridge works, which is almost all of the time, it feels like the best possible way to quickly access, edit, and share photos from a full-size camera.

User’s Nikon DSLR is also compatible with over 85 current high quality NIKKOR lenses, from fisheye and ultra-wide-angle to super-telephoto zoom ranges, Micro-NIKKOR and perspective control lenses as well as teleconverters which extend the focal length range even more.

In addition to lenses, user’s DSLR is also compatible with a range of Nikon Speedlights—accessory flashes that will allow them to better illuminate their subjects, both on or off the camera. These flash units are also compatible with a range of accessories such as color correction filters and light modifiers, which will allow you to get as creative as they want in lighting theirr subjects. Smartphones have been eating into the camera market in a huge way over the last half decade. To staunch the bleeding, camera companies started trying to build a bridge between smartphones and their products. One of the earliest manifestations of this was the Eye-Fi card, an SD card with a small wireless radio that let you transfer photos from the card to your phone.

CamRanger is a stand-alone device that connects to select Canon or Nikon DLSR cameras with a USB cable. It creates its own WiFi network that your device (iPad, iPhone, iPod Touch, Android, or Mac or Windows computer) can then connect to. The free CamRanger app then enables control of the camera. There is no need for an existing Internet connection or other equipment. CamRanger operates on a rechargable, replaceable battery (extra batteries available for purchase). Battery life varies upon usage but 5 to 6 hours is typical; however, in ideal scenarios over 11 hours can be achieved for intervalometer with no device (iPad, iPhone, iPod Touch, Android, or Mac or Windows computer) connected.

Select Nikon DSLRs, Nikon 1, and COOLPIX digital cameras use the optional WU-1a wireless mobile adapter; while other models of DSLR, and Nikon 1 cameras utilize the optional WU-1b wireless mobile adapter allowing you to take photos with these high quality Nikon digital cameras, NIKKOR lenses and Speedlights, and upload them via an Android™-powered smartphone or tablet or iPhone®, iPad® and iPod touch® to your computer, to the web or into an email. The app. also lets you access the photos on the media card in the respective cameras using your smart device. The real difference is that always on connection. Snapbridge uses Bluetooth Low Energy to connect to user’s phone, which means that pairing stays put even if they turn the D500 off. It even remains if they swap out the camera’s battery! Using BLE also means that the camera won’t drain their phone’s battery, too. Better yet, it eliminates the most annoying part of using Wi-Fi on cameras, which is that they always have to reconnect their phone to the camera, either because their phone jumped to another Wi-Fi connection or because the camera powered down its Wi-Fi radio. This was always especially annoying on iPhones, where they could have to constantly go back to the settings menu to reconnect to the camera’s Wi-Fi.