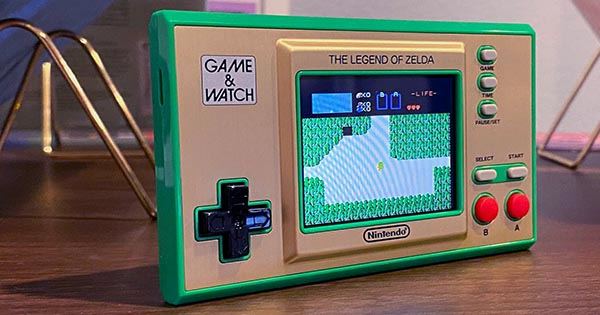 I’m holding the Legend of Zelda Game & Watch, the second in Nintendo’s line of quirky retro handhelds aimed squarely at folks who already own (or can’t find) a Switch. It does a good job, and the three classic Zelda games provided are excellent choices for a Nintendo-style adventure that fits in a pocket. This $50 device, which announced a few months ago, looks very similar to last year’s Mario Game & Watch, the first in the series based on Nintendo’s pre-Game Boy line of handhelds. The inclusion of the start and choose buttons, which are utilized in the Zelda games, is the sole difference.

The games include The Legend of Zelda, its brutally difficult side-scrolling sequel The Adventure of Link, and the beloved puzzle box classic Link is awakening, which recently redid in style. A reproduction of a vintage monochrome Game & Watch from the 1980s is also included, albeit its entertainment value is rather limited. You may play each one straight through or save your progress by using the Game button. However, there are no save states after that, so prepare to die a million times in Zelda II.

The display is not spectacular, but it does a good job of matching the game’s quality, and everything looks as clear as can be anticipated at that size. It is clearly more difficult to play on this portable than on a television, but it is not impossible.

For the record, these close-up shots reveal more pixilation than you would see while playing; there is no screen door effect, as shown in the image below. Link’s Awakening contains an aspect ratio adjustment option, which allows you to switch between them on the fly.

The original Game Boy screen was smaller than 4:3, therefore you may move between them on the fly. It is worth noting that this is the original monochrome version, not the colorized version.

The “watch” section includes a clock and, as of now, a timer app. The clock is actually quite entertaining: in the original game, Link begins his quest at midnight and noon, beginning by collecting his sword and progressing haphazardly through the game, repeatedly killing the endlessly spawning monsters on a screen for a minute at a time — and occasionally dying himself, only to be revived — before moving on to the next one. You will not see the same event happen repeatedly since a basic AI playing the game does not record it.

He, for example, clearing a green dungeon room of Stalfos at 7:59, and when the clock strikes 8, he invariably moves into the boss chamber, where he plays the flute to lower Digdogger, slaughters the miserable shriveled monster, and receives his fifth Triforce piece.

He reaches the last dungeon at 11:30 a.m. and, in a bit of an anticlimax, dispatches Ganon at midnight — and the cycle continues, although with a different color scheme. The dungeons and overworld have altered in different ways to accommodate the clock, although they are not precisely, as they were in the original game. Even still, as this Sisyphean Link continues through the game, acquiring various tools and jewels repeatedly, you get a sense of advancement.

The timer is a little but useful tool that does exactly what it says on the tin: it counts down from any full minute increment under an hour. Link fights waves of opponents in the style of Zelda II, and he appears to be having as much problems slaying those silly blue knights as I do. It keeps track of his best “score” over time, so you can set it to three-minute rounds and wager on his performance.

As I previously stated, the hardware remains identical, but the inclusion of the start and choose buttons pushes A and B even farther down the device. If you expect to play for more than a few minutes and have average-size or bigger hands, I believe it has progressed from “not ideal” to “uncomfortable.” Is not it possible to move those up a half-inch, Nintendo? The equipment, fortunately, is relatively light. A little Triforce on the back of the Zelda Game & Watch lights up extremely weakly for no apparent reason. A nice, superfluous detail shows someone over there is truly into this thing.

The battery life will likely vary depending on how bright the screen is set, but it should last at least five or six hours, if not more. I am currently testing it and will update this article later.

Another neat feature, which I missed on the Mario version, is that the box serves as a small stand; you fold out cutout legs and it supports the gadget at the right viewing angle — the viewing angle is not fantastic, so putting it flat or propped straight up is not optimal. Overall, the Zelda Game & Watch is a delightful little gizmo that any fan of the old NES and Game Boy games would enjoy. The only question is whether you will be able to obtain one.