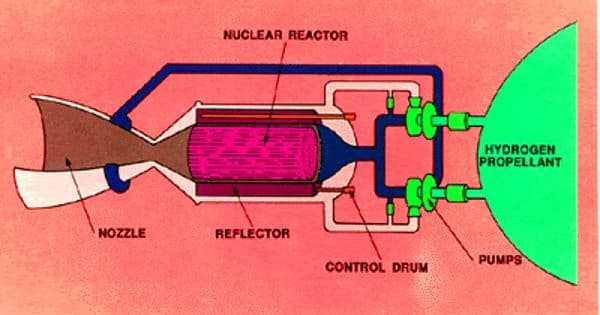 Rocket science deserves its reputation as a subject that only geniuses dare study. A nuclear thermal rocket (NTR) is a type of thermal rocket where the heat from a nuclear reaction, often nuclear fission, replaces the chemical energy of the propellants in a chemical rocket. Modern rockets are immensely complex systems that push the limits of aeronautics, chemistry, materials science, and engineering.

In an NTR, a working fluid, usually liquid hydrogen, is heated to a high temperature in a nuclear reactor and then expands through a rocket nozzle to create thrust. A rocket produces thrust by expelling matter at high velocities. The external nuclear heat source theoretically allows a higher effective exhaust velocity and is expected to double or triple payload capacity compared to chemical propellants that store energy internally. It does not take a rocket scientist to recognize that the momentum of the rocket-fuel system is conserved. A nuclear reaction typically releases ten million times the energy of a chemical reaction. Thus, it would seem that the weight of the fuel necessary for a nuclear rocket to deliver a certain payload would be significantly less than the weight of the fuel a chemical rocket would need to heave the same weight the same distance. 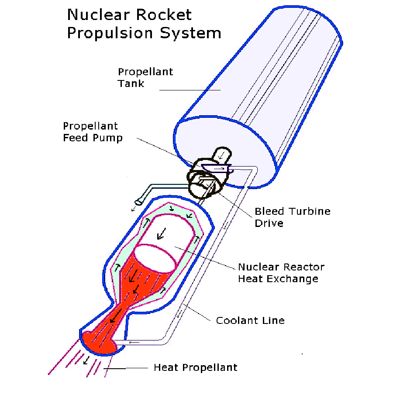 NTRs have been proposed as a spacecraft propulsion technology, with the earliest ground tests occurring in 1955. The US maintained an NTR development program through 1973 when it was shut down to focus on Space Shuttle development. Today’s advances in materials, testing capabilities, and reactor development are providing an impetus for NASA to appraise Nuclear Thermal Propulsion (NTP) as an attractive 21st-century option to propel human exploration missions to Mars and other deep-space destinations. Current satellites have very small thrusters that serve almost exclusively to adjust altitude, and these are often electric because satellites can gather solar energy for much of the year.

Particularly, the Nuclear Thermal Rocket (NTR) is a leading candidate for near-term human missions to Mars and beyond due to its relatively high thrust and efficiency. Although more than ten reactors of varying power output have been built and tested, as of 2020, no nuclear thermal rocket has flown. Traditional NTR designs use typically high-power reactors with fast or epithermal neutron spectrums to simplify core design and to maximize thrust. In parallel, there are a series of new NTR designs with lower thrust and higher efficiency, designed to enhance mission versatility and safety through the use of redundant engines for future commercialization.