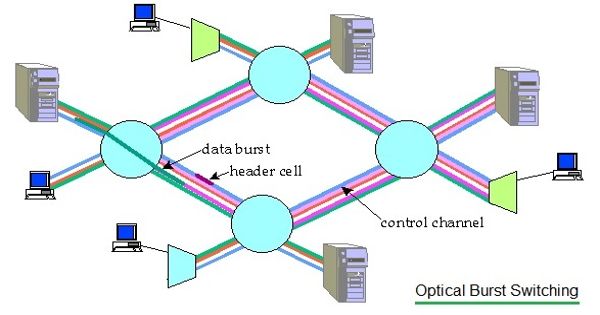 OBS is implemented using Wavelength Division Multiplexing (WDM), a data transmission technology that transmits data in an optical fibre by establishing several channels, each channel corresponding to a specific light wavelength. It differs from these paradigms because OBS control information is sent separately in a reserved optical channel and in advance of the data payload. In OBS, the user data is collected at the edge of the network, sorted based on a destination address, and grouped into variable sized bursts. These control signals can then be processed electronically to allow the timely setup of an optical light path to transport the soon-to-arrive payload. This is known as delayed reservation.

The purpose of optical burst switching (OBS) is to dynamically provision sub-wavelength granularity by optimally combining electronics and optics. It has several distinctive features: first, the packets are aggregated in the ingress (entry) node, for a very short period of time. This allows that packets that have the same constraints, e.g., the same destination address and maybe, the same quality of service requirements are sent together as a burst of data. OBS considers sets of packets with similar properties called bursts. Prior to transmitting a burst, a control packet is created and immediately sent toward the destination in order to set up a bufferless optical path for its corresponding burst. When the burst arrives at the egress (exit) node, it is disassembled and its constituent packets routed to their destination.

Optical Burst Switching is used in core networks, and viewed as a feasible compromise between the existing Optical Circuit Switching (OCS) and the yet not viable Optical Packet Switching (OPS). Therefore, OBS granularity is finer than optical circuit switching (OCS). OBS provides more bandwidth flexibility than wavelength routing but requires faster switching and control technology. Another distinctive characteristic of OBS is that the Control Packet will undergo optical to electronic to optical conversion at each intermediate node, and also optical to electronic conversion at the egress node, as to allow these nodes to be able to configure its optical switching devices. OBS can be used for realizing dynamic end-to-end all optical communications.