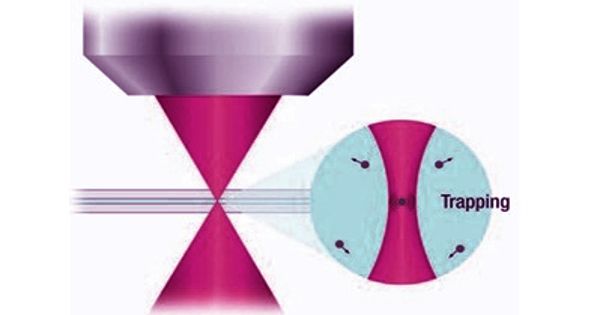 Optical tweezers are tools based on strongly focused light, enable optical trapping, manipulation, and characterization of a wide range of microscopic and nanoscopic materials. They are scientific instruments that use a highly focused laser beam to hold and move microscopic objects like atoms, nanoparticles, and droplets, in a manner similar to tweezers. These use light to manipulate microscopic objects as small as a single atom. If the object is held in air or vacuum without additional support, it can be called optical levitation. The radiation pressure from a focused laser beam is able to trap small particles. These have been used to trap dielectric spheres, viruses, bacteria, living cells, organelles, small metal particles, and even strands of DNA.

Optical tweezers are scientific instruments that use a highly focused laser beam to hold and move microscopic objects like atoms, nanoparticles, and droplets, in a manner similar to tweezers.

The basic principle behind optical tweezers is the momentum transfer associated with bending light. The laser light provides an attractive or repulsive force (typically on the order of piconewtons), depending on the relative refractive index between particle and the surrounding medium. Light carries a momentum that is proportional to its energy and in the direction of propagation. Levitation is possible if the force of the light counters the force of gravity. Any change in the direction of light, by reflection or refraction, will result in a change in the momentum of the light. The trapped particles are usually micron-sized, or smaller. Dielectric and absorbing particles can be trapped, too. Optical tweezers are used widely in physics, chemistry, and biology. They are especially useful in single-molecule studies. 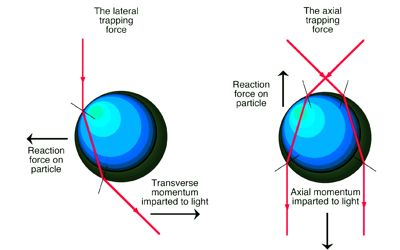 Most frequently, optical tweezers are built by modifying a standard optical microscope. These instruments have evolved from simple tools to manipulate micron-sized objects to sophisticated devices under computer control that can measure displacements and forces with high precision and accuracy. This technique has become an important tool in a wide range of fields such as bioengineering, material science, and physics due to its ability to hold and manipulate particles and to measure forces in the femtonewton and piconewton ranges.

In the biological sciences, these instruments have been used to apply forces in the pN-range and to measure displacements in the nm range of objects ranging in size from 10 nm to over 100 mm.  Optical tweezers are used in biology and medicine (for example to grab and hold a single bacterium or cell-like a sperm cell, blood cell, or DNA), nanoengineering, and nanochemistry (to study and build materials from single molecules), quantum optics and quantum optomechanics. The development of optical tweezing by Arthur Ashkin was lauded with the 2018 Nobel Prize in Physics. In practice, optical tweezers are very expensive, custom-built instruments. These instruments usually start with a commercial optical microscope but add extensive modifications.