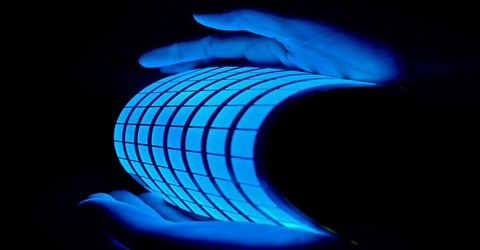 Organic Light Emitting Diodes or OLED is a flat light emitting technology, which was made by placing a series of organic thin films between two conductors. When electrical current is applied, a bright light is emitted. OLEDs are used to create digital displays in devices such as television screens, computer monitors, portable systems such as mobile phones, handheld game consoles and PDAs. A major area of research is the development of white OLED devices for use in solid-state lighting applications. There are two main families of OLED: those based on small molecules and those employing polymers. Adding mobile ions to an OLED creates a light-emitting electrochemical cell (LEC) which has a slightly different mode of operation. OLED displays can use either passive-matrix (PMOLED) or active-matrix (AMOLED) addressing schemes. Passive matrix OLEDs (PMOLED) uses a simple control scheme in which you control each row (or line) in the display sequentially whereas active-matrix OLEDs (AMOLED) require a thin-film transistor backplane to switch each individual pixel on or off, but allow for higher resolution and larger display sizes. OLED displays have the following advantages over LCD displays:

OLED technology is used in commercial applications such as displays for mobile phones and portable digital media players, car radios and digital cameras among others. Such portable applications favor the high light output of OLEDs for readability in sunlight and their low power drain. Portable displays are also used intermittently, so the lower lifespan of organic displays is less of an issue. It have been used in most Motorola and Samsung color cell phones, as well as some HTC, LG and Sony Ericsson models. Nokia has also introduced some OLED products including the N85 and the N86 8MP, both of which feature an AMOLED display. OLED technology can also be found in digital media players such as the Creative ZEN V, the iriver clix, the Zune HD and the Sony Walkman X Series.

DuPont stated in a press release in May 2010 that they can produce a 50-inch OLED TV in two minutes with a new printing technology. If this can be scaled up in terms of manufacturing, then the total cost of OLED TVs would be greatly reduced. DuPont also states that OLED TVs made with this less expensive technology can last up to 15 years if left on for a normal eight-hour day.

Textiles incorporating OLEDs are an innovation in the fashion world and pose for a way to integrate lighting to bring inert objects to a whole new level of fashion. The hope is to combine the comfort and low cost properties of textile with the OLEDs properties of illumination and low energy consumption. Although this scenario of illuminated clothing is highly plausible, challenges are still a road block. Some issues include: the lifetime of the OLED, rigidness of flexible foil substrates, and the lack of research in making more fabric like photonic textiles.

LG was once again the only manufacturer to produce OLED TVs in 2015 as Samsung said it would rather concentrate on 4K LCD screens. The first curved 4K OLED TV passed through our doors and exited with a glowing five-star review.

By 2004 Samsung, South Korea’s largest conglomerate, was the world’s largest OLED manufacturer, producing 40% of the OLED displays made in the world, and as of 2010 has a 98% share of the global AMOLED market. The company is leading the world of OLED industry, generating $100.2 million out of the total $475 million revenues in the global OLED market in 2006. As of 2006, it held more than 600 American patents and more than 2800 international patents, making it the largest owner of AMOLED technology patents. In January 2015, LG Display signed a long term agreement with Universal Display Corporation for the supply of OLED materials and the right to use their patented OLED emitters.

Advantage and Disadvantage about OLED

Some of Advantages are given below:

Lower cost in the future: OLEDs can be printed onto any suitable substrate by an inkjet printer or even by screen printing, theoretically making them cheaper to produce than LCD or plasma displays. However, fabrication of the OLED substrate is currently more costly than that of a TFT LCD, until mass production methods lower costs through scalability.

Better power efficiency and thickness: LCDs filter the light emitted from a backlight, allowing a small fraction of light through. Thus, they cannot show true black. The refractive value and the matching of the optical IMLs property, including the device structure parameters, also enhance the emission intensity at these thicknesses.

Response time: OLEDs also have a much faster response time than an LCD. Using response time compensation technologies, the fastest modern LCDs can reach response times as low as 1 ms for their fastest color transition, and are capable of refresh frequencies as high as 240Hz.

Some of Disadvantages are given below:

Lifespan: The biggest technical problem for OLEDs was the limited lifetime of the organic materials. One 2008 technical report on an OLED TV panel found that “After 1,000 hours the blue luminance degraded by 12%, the red by 7% and the green by 8%.” In particular, blue OLEDs historically have had a lifetime of around 14,000 hours to half original brightness (five years at 8 hours a day) when used for flat-panel displays. This is lower than the typical lifetime of LCD, LED or PDP technology.

Color balance: Additionally, as the OLED material used to produce blue light degrades significantly more rapidly than the materials that produce other colors, blue light output will decrease relative to the other colors of light. More commonly, though, manufacturers optimize the size of the R, G and B subpixels to reduce the current density through the subpixel in order to equalize lifetime at full luminance.

Outdoor performance:  As an emissive display technology, OLEDs rely completely upon converting electricity to light, unlike most LCDs which are to some extent reflective. e-paper leads the way in efficiency with ~ 33% ambient light reflectivity, enabling the display to be used without any internal light source. The metallic cathode in an OLED acts as a mirror, with reflectance approaching 80%, leading to poor readability in bright ambient light such as outdoors.

Power consumption: While an OLED will consume around 40% of the power of an LCD displaying an image that is primarily black, for the majority of images it will consume 60–80% of the power of an LCD. However, an OLED can use more than three times as much power to display an image with a white background, such as a document or web site. This can lead to reduced battery life in mobile devices, when white backgrounds are used.