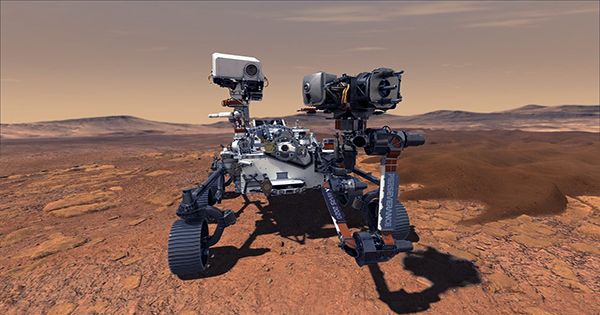 Perseverance, a NASA spacecraft that has been orbiting Mars for more than seven months, has already provided valuable scientific data. The mission’s initial results have already been released, and they confirm the nature of the location the rover assigned to investigate. Perseverance landed in Jezero crater, which was once an ancient Martian lake 3.6 billion years ago. The presence of deltas had been predicted by satellite data, but observations from the rover’s first three months have confirmed it. Perseverance studies, published in the journal Science, indicate sediment patterns known as “scarps” that suggest the deltas’ flow evolved into a lake, as well as episodes of catastrophic flooding that displaced the large rocks seen in the crater.

“You’re literally staring at this huge desert scene if you look at these photographs.” In a statement, co-author and MIT professor Benjamin Weiss stated, “It’s the most desolate spot you could possibly visit.” “Despite the fact that there isn’t a drop of water around, we have proof of a totally different past here.” Something monumental occurred in the planet’s history.”

It was a completely different planet when Mars, and especially Jezero crater, was wet, A world that may or may not have supported life. Perseverance has been collecting samples from Jezero crater, which will bring back to Earth in a few years to help us figure out if Mars has, or could have life. The entire region is a time capsule of what life was like on Mars, so it is the ideal spot for a peek.

In a statement, lead author Nicolas Mangold, CNRS senior researcher at Laboratoire Planétologie et Géodynamique, said, “The mission’s purpose is to use the rover to help us understand the geology and ancient climate of Mars, and to try to find indications of past life that might still be preserved.” “Perseverance will have to sample rocks of various types and ages in order to accomplish so.”

Despite the clear signals from orbital satellites, the Spirit rover was never able to establish that Gusev Crater was an ancient Martian lake, so this data from Perseverance is interesting. According to the rover’s findings, the lake is probably less than previously thought. Large stones on top of the fluvial deposit indicate that the river delta saw dramatic rapid flows that inundated the crater and brought boulders from further afield into it on occasion.

“This observation clearly suggests that the lake vanished as a result of an abrupt hydrological change linked to a climate transition,” Mangold noted. “Cooling caused by a glacier or increasingly drier circumstances could explain this.” In reality, certain deserts on Earth see flash floods that emerge and recede in a matter of hours.” The rover will continue to move throughout the old delta’s surface, with the crew hoping to explore those enormous boulders to learn more about what happened to them. This is not the first time that extreme floods have been reported on Mars, implying an ancient world with even more dramatic dynamism.