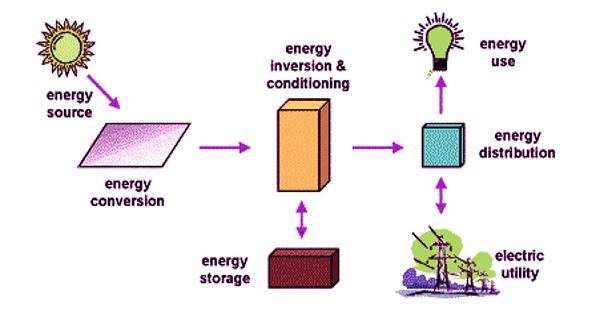 Solar panels convert the energy of photons (light particles) into electricity. A photovoltaic system, also known as a PV system, is a power system designed to supply usable solar power by means of photovoltaics. This system is composed of one or more solar panels combined with an inverter and other electrical and mechanical hardware that use energy from the Sun to generate electricity. It consists of an arrangement of several components, including solar panels to absorb and convert sunlight into electricity, a solar inverter to convert the output from direct to alternating current, as well as mounting, cabling, and other electrical accessories to set up a working system. PV systems can vary greatly in size from a small rooftop or portable systems to massive utility-scale generation plants. It may also use a solar tracking system to improve the system’s overall performance and include an integrated battery solution, as prices for storage devices are expected to decline. Although PV systems can operate by themselves as off-grid PV systems, this article focuses on systems connected to the utility grid, or grid-tied PV systems. 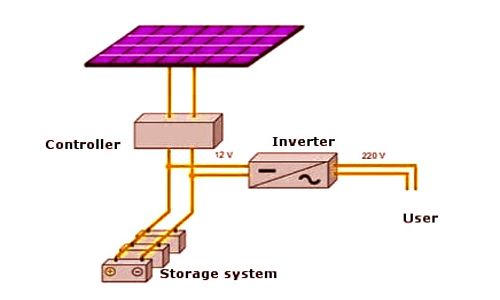 The light from the Sun, made up of packets of energy called photons, falls onto a solar panel and creates an electric current through a process called the photovoltaic effect. Strictly speaking, a solar array only encompasses the ensemble of solar panels, the visible part of the PV system, and does not include all the other hardware, often summarized as a balance of system (BOS). Each panel produces a relatively small amount of energy but can be linked together with other panels to produce higher amounts of energy as a solar array. When a photon hits a photovoltaic (PV) device, its energy is transferred from the photon to the local electrons in the material. As PV systems convert light directly into electricity, they are not to be confused with other solar technologies, such as concentrated solar power or solar thermal, used for heating and cooling. The electricity produced from a solar panel (or array) is in the form of direct current (DC).

Solar Cell is the basic building block of Solar PV technology. Most people are familiar with PV Solar Cells that power calculators. PV systems range from small, rooftop-mounted or building-integrated systems with capacities from a few to several tens of kilowatts, to large utility-scale power stations of hundreds of megawatts. Because photovoltaic cells only generate a limited amount of energy, numerous cells are connected to create a solar panel. Nowadays, most PV systems are grid-connected, while off-grid or stand-alone systems account for a small portion of the market. Working together, multiple solar cells generate higher currents and therefore more energy.