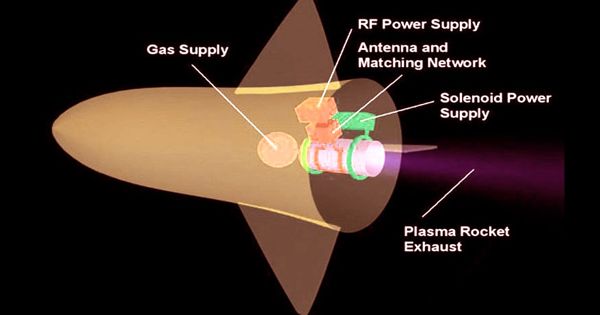 A plasma propulsion engine is a type of electric propulsion that generates thrust from a quasi-neutral plasma. Plasma-based propulsion is becoming the baseline solution for satellite stationing and attitude/orbit control. This is in contrast with ion thruster engines, which generate thrust through extracting an ion current from the plasma source, which is then accelerated to high velocities using grids/anodes. This electric propulsion technology also called the Hall effect or stationary plasma thrusters offers a significant weight reduction compared with traditional chemical propulsion systems. These exist in many forms.

Plasma thrusters do not typically use high voltage grids or anodes/cathodes to accelerate the charged particles in the plasma, but rather use currents and potentials which are generated internally in the plasma to accelerate the plasma ions. In this type of system, a stream of electrons bombards a fuel (such as xenon gas), generating a plasma that is accelerated to produce very high specific impulse for applications in the vacuum of space where less absolute power is needed. While this results in a lower exhaust velocity by virtue of the lack of high accelerating voltages, this type of thruster has a number of advantages. Ion thrusters provide a high jet velocity but the thrust density is low due to space-charge limitations. 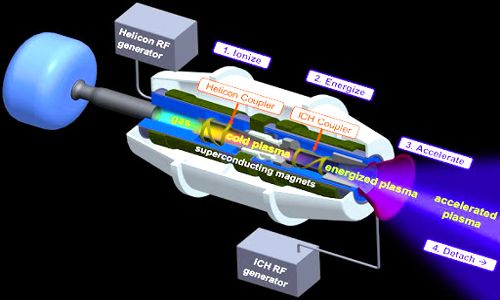 The lack of high voltage grids of anodes removes a possible limiting element as a result of grid ion erosion. Electric propulsion utilizes electric and magnetic fields to accelerate propellant to a much higher velocity than chemical propulsion does, and, as a result, the required propellant mass is reduced. The plasma exhaust is ‘quasi-neutral’, which means that ions and electrons exist in equal numbers, which allows simple ion-electron recombination in the exhaust to neutralize the exhaust plume, removing the need for an electron gun (hollow cathode). The acceleration in the thruster is thermal, electrostatic, or electromagnetic. This type of thruster often generates the source plasma using radiofrequency or microwave energy, using an external antenna. The basic principle of rocket propulsion stems from Newton’s third law of motion, the so-called law of action and reaction. That principle applies to the motion of a garden hose as well as it does to the powerful engines of the space shuttle

In the Pulsed Plasma Thruster, a solid propellant is accelerated by a magnetic field pressure in a way that is similar in principle to the pulsed acceleration of plasmas in other, very different devices, such as the railgun or the plasma opening switch. This fact, combined with the absence of hollow cathodes (which are very sensitive to all but the few noble gases) allows the intriguing possibility of being able to use this type of thruster on a huge range of propellants, from argon, to carbon dioxide, air mixtures, to astronaut urine. Plasma engines have been stuck in the lab for the past decade or so. And research on them has largely been limited to the idea of propelling satellites once in space.