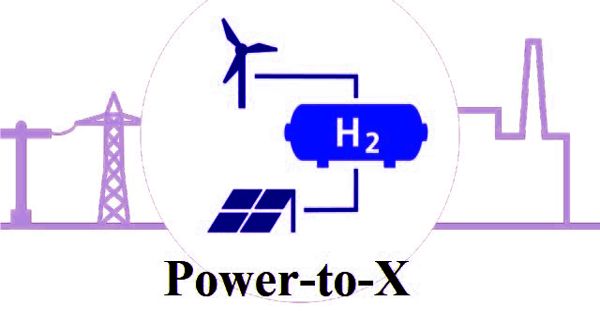 Efforts to transform the energy sector have so far focused on increasing renewable generation capacity to lay the foundation for a future energy system. Power-to-X is a number of electricity conversion, energy storage, and reconversion pathways that use surplus electric power, typically during periods where fluctuating renewable energy generation exceeds load. They are various energy conversion technologies that can be used to store power surpluses from renewable energy sources. By turning renewable electricity into fuel, power-to-X could free transport, heating, and industrial process from fossil fuels — once costs fall. Among the secondary energy carriers, electricity can be stored in the form of chemical potential following the so-called “Power-to-X” scheme. Power-to-X conversion technologies allow for the decoupling of power from the electricity sector for use in other sectors (such as transport or chemicals), possibly using the power that has been provided by additional investments in generation. The term is widely used in Germany and may have originated there during the two World Wars. 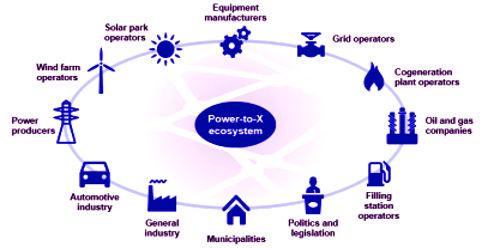 Fig- Power-to-X: Where to put surplus energy from renewable energies

Power-to-X as a key technology in sector coupling offers the opportunity to transform and save energy from renewable resources in a chemical form for long term storage and use, with e-Hydrogen as the core component. The X in the terminology can refer to one of the following: power-to-ammonia, power-to-chemicals, power-to-fuel, power-to-gas, power-to-hydrogen, power-to-liquid, power-to-methane, power to food, power-to-power, and power-to-syngas. Electric vehicle charging, space heating and cooling, and water heating can be shifted in time to match generation, forms of demand response that some term power-to-mobility and power-to-heat. It is an umbrella term for different ways of generating energy, namely power-to-gas, power-to-liquid, power-to-fuel, power-to-chemicals, and power-to-heat.” The relatively low efficiency of power-to-X methods producing synthetic fuels limits their employment to areas in which the direct use of renewable sources of energy is either barely possible or simply not possible at all.