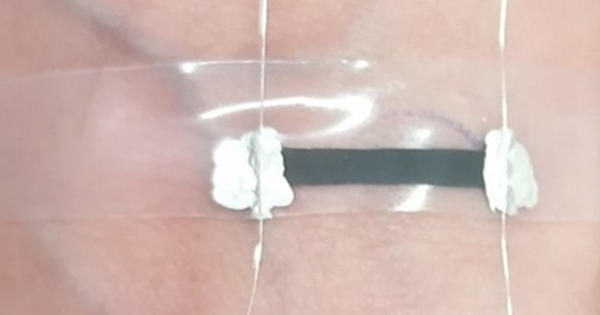 AMBER, the SFI Centre for Advanced Materials and Bioengineering Research, and Trinity’s School of Physics researchers have created next-generation graphene-based sensing technology with their innovative G-Putty material. The teams’ technology is an ideal candidate for the emerging fields of wearable electronics and medical diagnostic devices because it maximizes sensitivity and flexibility without sacrificing performance.

The team, led by Trinity’s School of Physics’ Professor Jonathan Coleman, one of the world’s leading nanoscientists, demonstrated the ability to create a low-cost, printed graphene nanocomposite strain sensor.

The team’s printed sensors are 50 times more sensitive than the industry standard and outperform other comparable nano-enabled sensors in an important metric seen as a game-changer in the industry: flexibility.

The team discovered that by creating and testing inks of various viscosities (runniness), they could tailor G-Putty inks to the printing technology and application.

They published their results in the journal Small.

Strain sensors are a highly valuable diagnostic tool in medical settings, where they are used to measure changes in mechanical strain such as pulse rate or a stroke victim’s ability to swallow. A strain sensor detects mechanical changes and converts them into proportional electrical signals, acting as a mechanical-electrical converter.

While strain sensors are currently on the market, they are mostly made of metal foil, which limits their wearability, versatility, and sensitivity.

“Previously, my team and I created graphene nanocomposites with polymers found in rubberbands and silly putty.” G-putty, our highly malleable graphene-blend silly putty, has now been transformed into an ink blend with excellent mechanical and electrical properties. Our inks have the advantage of being able to be converted into a functional device using industrial printing methods ranging from screen printing to aerosol and mechanical deposition.

“Another advantage of our low-cost system is that we can control a variety of different parameters during the manufacturing process, allowing us to tune the sensitivity of our material for specific applications requiring detection of extremely small strains.”

Current market trends in the global medical device market indicate that this research is well positioned within the transition to personalised, tuneable, wearable sensors that can be easily incorporated into clothing or worn on skin.

The wearable medical device market was valued at USD $16 billion in 2020, with significant growth expected, particularly in remote patient monitoring devices and an increased emphasis on fitness and lifestyle monitoring.

The team is determined to turn scientific research into a product. “The development of these sensors represents a significant step forward for the area of wearable diagnostic devices — devices that can be printed in custom patterns and comfortably mounted to a patient’s skin to monitor a range of different biological processes,” said Dr. Daniel O’Driscoll of Trinity’s School of Physics.

“We are currently investigating applications to monitor real-time breathing and pulse, joint motion and gait, and pregnancy early labor. We can tailor the sensor to the application because our sensors combine high sensitivity, stability, and a wide sensing range with the ability to print bespoke patterns onto flexible, wearable substrates. The methods used to manufacture these devices are low-cost and easily scalable, which are critical requirements for producing a diagnostic device for widespread use.”

Professor Coleman was recently awarded a European Research Council Proof of Concept grant to build on these findings and begin developing a commercial product prototype. The group’s ultimate goal is to find potential investors and industry partners and form a spin-off around the technology that focuses on both recreational and medical applications.