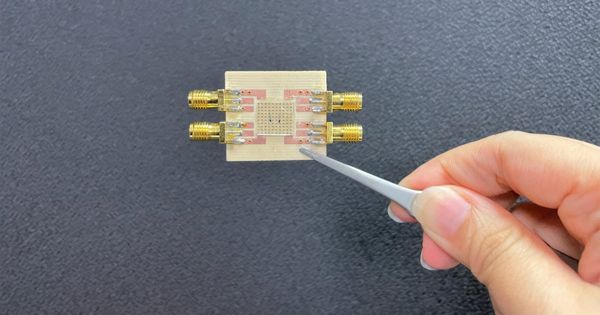 With the rise of the digital age, the number of WiFi sources for wirelessly transmitting information between devices has increased exponentially. As a result, the 2.4GHz radio frequency used by WiFi is widely used, with excess signals available for alternative uses.

A research team from the National University of Singapore (NUS) and Japan’s Tohoku University (TU) has developed a technology that harvests and converts wireless radio frequencies into energy to power small electronics using tiny smart devices known as spin-torque oscillators (STOs). The researchers successfully harvested energy using WiFi-band signals to power a light-emitting diode (LED) wirelessly and without the use of a battery in their study.

A research team has developed a new technology that uses tiny smart devices known as spin-torque oscillators to harvest and convert wireless radio frequencies into energy to power small electronics.

“We are surrounded by WiFi signals, but they are inactive when we are not using them to access the Internet, which is a huge waste.” Our most recent achievement is a step toward converting readily available 2.4GHz radio waves into a green source of energy, thereby reducing the need for batteries to power electronics that we use on a daily basis. Small electric gadgets and sensors can thus be powered wirelessly as part of the Internet of Things by using radiofrequency waves.

“With the advent of smart homes and cities, our work could lead to energy-efficient applications in communication, computing, and neuromorphic systems,” said project leader Professor Yang Hyunsoo of the NUS Department of Electrical and Computer Engineering.

The study was conducted in collaboration with Professor Guo Yong Xin’s research team from the NUS Department of Electrical and Computer Engineering, as well as Professor Shunsuke Fukami and his team from TU. On May 18, 2021, the findings were published in Nature Communications.

Spin-torque oscillators are a new class of devices that produce microwaves and have applications in wireless communication systems. However, the use of STOs is limited due to their low output power and wide linewidth.

While mutual synchronization of multiple STOs is one solution, current schemes, such as short-range magnetic coupling between multiple STOs, have spatial constraints. Long-range electrical synchronization using vortex oscillators, on the other hand, has frequency responses of only a few hundred MHz. It also necessitates dedicated current sources for each STO, which can complicate overall on-chip implementation.

To overcome the spatial and low-frequency constraints, the research team devised an array of eight STOs connected in series. The 2.4 GHz electromagnetic radio waves used by WiFi were converted into a direct voltage signal using this array, which was then transmitted to a capacitor, which lit up a 1.6-volt LED. After charging the capacitor for five seconds, it was able to light the same LED for one minute after the wireless power was turned off.

The researchers also emphasized the importance of electrical topology when designing on-chip STO systems and compared the series design to the parallel design in their study. They discovered that the parallel configuration is better for wireless transmission because it has better time-domain stability, spectral noise behavior, and control over impedance mismatch. Series connections, on the other hand, have an advantage for energy harvesting due to the additive effect of the diode-voltage from STOs.

Dr. Raghav Sharma, the paper’s first author, shared his thoughts on the significance of their findings “In addition to developing an STO array for wireless transmission and energy harvesting, we demonstrated control over the synchronizing state of coupled STOs using injection locking from an external radio-frequency source. These findings are significant for future applications of synchronized STOs, such as high-speed neuromorphic computing.”

The researchers want to increase the number of STOs in the array they designed to improve the energy harvesting ability of their technology. They also intend to put their energy harvesters to the test for wirelessly charging other useful electronic devices and sensors.

The research team also hopes to collaborate with industry partners to investigate the development of on-chip STOs for self-sustaining smart systems, which could pave the way for wireless charging and signal detection systems.