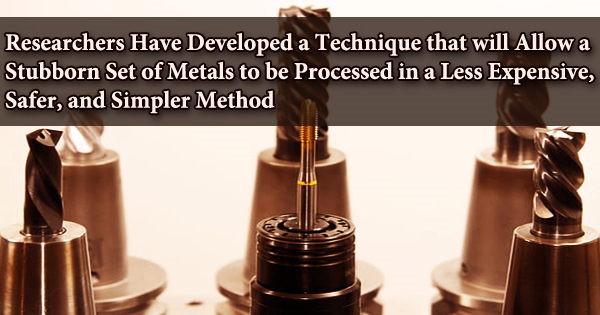 Researchers Have Developed a Technique that will Allow a Stubborn Set of Metals to be Processed in a Less Expensive, Safer, and Simpler Method

Researchers at the University of Minnesota Twin Cities College of Science and Engineering have developed a method that will enable a “stubborn” set of metals and metal oxides to be formed into thin films that may be utilized in a variety of electronics, computer components, and other applications.

The findings of the study were reported in the Proceedings of the National Academy of Sciences (PNAS). The researchers patented the technique with the help of the University of Minnesota’s Technology Commercialization Office, and the industry has already expressed interest.

Metal is a group of materials with strong electrical and thermal conductivity, as well as malleability, ductility, and high light reflection. Metals make up around three-quarters of all known chemical elements. Aluminum, iron, calcium, sodium, potassium, and magnesium are the most prevalent minerals in the Earth’s crust.

Although the bulk of metals are found in ores (mineral-bearing substances), a few, such as copper, gold, platinum, and silver, are commonly discovered in their free state because they do not readily react with other elements. Metals are crystalline solids in most cases.

Before they may be employed in modern goods like electronics, displays, fuel cells, or catalytic applications, many metals, and their compounds must be transformed into thin films. Metals that are “stubborn,” such as platinum, iridium, ruthenium, and tungsten, are exceedingly difficult to convert into thin films because they must be vaporized at extremely high temperatures (typically above 2,000 degrees Celsius).

Metal emissions are generated by mining, metal casting, and other industrial operations. Metal particles can be inhaled or consumed by humans through food and drink. Some metals, such as lead, are harmful to one’s health.

Typically, scientists use procedures like sputtering and electron beam evaporation to create these metal sheets. The latter involves melting and evaporating metals at high temperatures to produce a layer on top of wafers. However, because of the high voltage utilized, this traditional approach is highly costly, consumes a lot of energy, and may be dangerous.

Researchers at the University of Minnesota have devised a method for evaporating these metals at much lower temperatures, less than 200 degrees Celsius instead of thousands. The researchers were able to significantly enhance the vapor pressures of the materials by developing and attaching organic ligands including carbon, hydrogen, and oxygen atoms to the metals, making them simpler to evaporate at lower temperatures. Their new method is not only easier, but it also produces higher-quality materials that are scalable.

“The ability to make new materials with ease and control is essential to transition into a new era of the energy economy,” said Bharat Jalan, the senior author of the study, an expert in material synthesis, and an associate professor and Shell Chair in the University of Minnesota Department of Chemical Engineering and Materials Science (CEMS).

“There is a historical relationship between synthesis scientific innovation and the creation of new technologies. Materials for diverse purposes cost millions of dollars to develop. Now, we’ve developed a simpler and less expensive method that allows us to create superior materials with atomic accuracy.”

These metals are utilized in a wide range of goods, from computer chips to display technologies. Platinum, for example, is being investigated for use in spintronic devices as a catalyst for energy conversion and storage.

“Bringing down the cost and complexity of metal deposition while also allowing for deposition of more complex materials like oxides will play a large role in both industrial and research efforts,” said William Nunn, a University of Minnesota chemical engineering and materials science graduate student, the paper’s first author, and a recipient of the department’s Robert V. Mattern Fellowship.

“We expect to see renewed interest in the more complicated materials that incorporate these difficult metals now that depositing these metals, such as platinum, will be easier.”