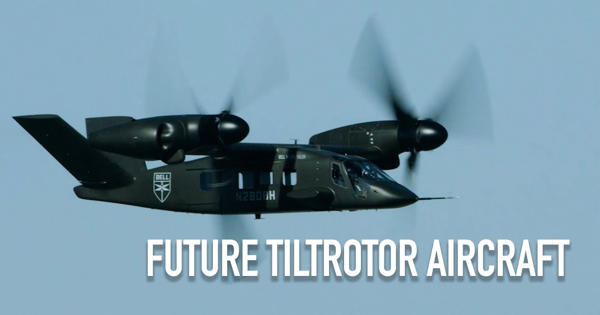 A new tiltrotor testbed recently completed by the US Army will aid the service in combating the dangerous whirl flutter phenomenon found in tiltrotors. A team of US Army researchers and industry partners completed the construction of a testbed that will help to inform the design of future Army rotorcraft after more than three years of development. The team intends to put the TiltRotor Aeroelastic Stability Testbed, or TRAST, through its paces in a massive wind tunnel at NASA Langley Research Center to assess the effectiveness of modern tiltrotor stability models.

According to a service statement issued on December 7, the TiltRotor Aeroelastic Stability Testbed (TRAST), which the US Army began developing in 2016, will assist researchers in developing cutting-edge analysis software that opens the door to new tiltrotor designs. The TRAST is a wall-mounted semi-span model with a rotor system based on the Bell XV-15 gimballed rotor. The service intends to put the TRAST through its paces in a massive wind tunnel at NASA Langley Research Center in Virginia, in order to assess the effectiveness of modern tiltrotor stability models.

The team plans to test the TiltRotor Aeroelastic Stability Testbed, or TRAST, in a massive wind tunnel at the NASA Langley Research Center to gauge the effectiveness of modern tiltrotor stability models.

“The goal of this research is to gain confidence in Future Vertical Lift vehicles that are aimed at a tiltrotor configuration,” said Andrew Kreshock, an Army aerospace engineer at the United States Army Combat Capabilities Development Command, now known as DEVCOM, Army Research Laboratory. “Because future vehicles will be developed without wind tunnel testing, accurate stability predictions will be more important.”

Because of the placement of heavy engines with large rotors on the ends of the wings, tiltrotors have severe stability issues. The interaction of the propellers and wings can cause whirl flutter, which occurs when strong aerodynamic forces cause the airframe structure to shake violently and even fail.

Tiltrotors have enormous potential in terms of speed and vertical lift capability for the Army. Unlike most aircraft, depending on the orientation of their rotors, they can hover in the air like a helicopter or fly forward at high speeds like an airplane.

The ability to switch between modes enables tiltrotors to take advantage of the benefits of both rotorcraft and fixed-wing aircraft depending on the situation. “Right now, the top speed of conventional helicopters is around 160 to 180 knots,” Kreshock explained. “Tiltrotors can reach speeds of up to 300 knots. We’re looking at nearly doubling our current fleet’s speed and thus increasing our range by nearly twice as much in the same flight time.”

Tiltrotors, despite their versatility, have severe stability issues due to the placement of extremely heavy engines with large rotors on the ends of the wings. The interaction of the propellers and the wings can cause whirl flutter, a dangerous phenomenon in which strong aerodynamic forces cause the airframe structure to shake violently and even fail.

As a result, tiltrotors are difficult to build properly, and researchers are still developing tools to predict how different tiltrotor configurations will perform against whirl flutter. TRAST, according to Kreshock, assists researchers in developing cutting-edge analysis software that opens the door to new tiltrotor designs.

“Helicopters have gone through many generations from when they were first built to now,” Kreshock explained. “The only tiltrotor in production is the V-22 Osprey.” “The tools for predicting stability in the V-22 were developed in the 1960s and 1970s. In comparison to tools from decades ago, we can now model as many degrees of freedom as we need because we have better computers.”

Kreshock and his colleagues used different analysis codes for different parts of the tiltrotor structure to predict whirl flutter behavior in TRAST. They used NASA Structure Analysis, or NASTRAN, to model the wing’s aerodynamics, and two different programs to model the rotorcraft: the Comprehensive Analytical Model of Rotorcraft Aerodynamics, or CAMRAD, and the Rotorcraft Comprehensive Analysis System, RCAS.

The team used the combination of these three programs to isolate the aerodynamic behavior of individual aircraft components, which they then used to estimate the TRAST model’s stability boundaries. Once the TRAST model has been tested in the wind tunnel, the researchers can compare how well the predictions generated by the analysis codes match TRAST’s actual behavior in the face of extreme whirl flutter.

“We want to measure the model’s stability boundary without actually breaking it,” Kreshock explained. “It’s tricky because, as you approach the stability boundary, you can see the model vibrate and become more unstable. As we watch this model shake from the window, we must keep one finger on the switch to turn off the wind tunnel before the model breaks.”

According to Kreshock, current tiltrotors, such as the V-22 Osprey, deal with whirl flutter by using reinforced airframes and thick airfoils, which significantly increase the aircraft’s weight. TRAST, he believes, may assist the Army in exploring new design possibilities for tiltrotors that address the whirl flutter problem in novel ways, such as wing extensions.

“In comparison to civilian aircraft, the Army always pushes their aircraft to the limit,” Kreshock explained. “In order to meet this demand, we must improve stability predictions so that we can not only have more efficient aircraft but also test new technology in the future.”