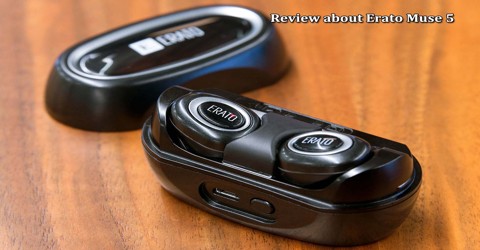 Most people may know Erato as the company behind the Apollo 7 fundraising campaign. The Erato Muse 5 come in a simple black box which opens to reveal the two wireless earbuds in a thin cardboard display, with their plastic charging case located below. An instruction manual beneath contains a handy chart to tell you how to setup the buds and use the on-board controls. Apple’s AirPods are probably the first really mainstream completely wireless headphones, but Erato has been making these for a while now. The company’s latest is the Muse 5, a set of in-ear buds that are cheaper than their debut Apollo 7 option, but still come with a charging case and very respectable battery life.

The Muse 5’s least impressive feature might be their design – it’s a bit like user are putting bulky buds they found at the local gas station in their ears, with the plastic construction and contrasting color plastic ring on each unit. But they are completely wireless, and effectively so, which is not something they will get at the gas station, obviously. Plus, their design is ergonomic – the two-part ear canal soft silicon tips ensure a snug fit, without requiring tricks like memory foam to ensure a seal. Muse 5 is also more unobtrusive than the Apollo 7, which stick some distance out of user’s ears. They’re also more subtle than Apple’s own AirPods, provided them get the black version, and they’re more likely to sit comfortably and securely in user’s ears if them happen to have ear shapes that don’t work with Apple’s native wireless buds.

The Muse 5 ditch the .45 caliber look of their predecessor in favor of the oblong in-ear shape popularized by the likes of Bragi’s Dash, and others. With that physical change, the company has also expanded on the traditional mushroom-tipped silicone seal with what they call FitSeal, which is a ridged silicone layer that goes below the tip to create a tighter fit in your ear canal. The model we tested are a subtle shade of black, but the company also offers three other finishes — pearl white, rose gold, and “brilliant” blue. The outside of each earpiece features a single control button with the Erato logo on it, which controls everything from playback to Bluetooth pairing and Siri and Google Voice, based on the length and number of taps it records. It takes a while to learn the patterns needed to perform various functions (laid out in the instructions), but once done, everything works nicely. Plus, the location, size, and the pleasant click when pressing each button assures accuracy.

Each earphone can be operated as a single Bluetooth earpiece, or they can be paired together for a stereo experience. Erato claims battery life is about four hours of streaming per charge, but in practice we registered around 3.5 hours, which is slightly above average when compared to the field. The case holds about two full recharges, for a total time of around 11-12 hours of playback on the go. Recharging the headphones in the case takes about 2 hours. The Erato Muse 5 mostly hold their Bluetooth connection well. But if they drop the connection or stutter once, user can generally expect them to do it a few more times in a row. The Muse 5 recover from dropouts and stutters themselves. But it still has the potential to be inconvenient when they are trying to zone out or concentrate on something else.

The frequency response indicates the range of pitches the headphones can produce. Human hearing range is usually quoted at 20 Hz – 20kHz, with most music falling well within those bounds. The spectrum shows where certain frequencies are classified.

Due to the nature of the fitseal and tips, the earbuds make contact not only with user’s ear canal but also with the rest of their ear conch. Unfortunately, the shape of user’s ear conch changes and deforms as their face makes expressions. This results in the headphones shifting and losing the seal every time they move/walk around/talk/eat/make expressions. The Muse 5 were no longer depending on the FitSeal sleeves to form a seal but instead the Comply tips were doing that on their own. Sound quality is good on the Muse 5, better than user might expect given the build quality and materials used. They sound as good as wired earbuds in this price range, and have better sound isolation than Apple’s AirPods, and potentially better sound depending on how user like their tunes. The built-in microphone also works well, despite not having any special beam forming magic, although user won’t’ want to use it for more than issuing Siri commands and making quick calls.

A note about 3D SurroundSound – this is a DSP that Erato claims increases sound quality. It just spaces the various out and increases separation.