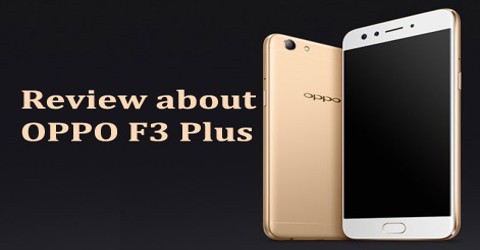 Review about OPPO F3 Plus

Review about OPPO F3 Plus

The OPPO F3 Plus smartphone was just launched in March 2017. Oppo is no stranger to making unusual, but often excellent, camera phones, and for the new F3 Plus, it put the dual-lens camera on the front of the phone instead.

In 2017, Oppo is hoping to expand its reach with the new F3 series, of which the F3 Plus is the first model. Selfie-obsessed buyers continue to be the target here and for that reason, Oppo has outfitted this phone with dual front cameras. Unlike Vivo’s V5 Plus, the second camera isn’t used for depth of field. Instead, the Oppo F3 Plus has a wide-angle lens for group selfies, which actually seems like a much more practical idea that’s likely to have a wider appeal. The Oppo F3 Plus is powered by 1.95GHz octa-core Qualcomm Snapdragon 653 processor and it comes with 4GB of RAM. The phone packs 64GB of internal storage that can be expanded up to 256GB via a microSD card.

OPPO Electronics Corp. is an electronics manufacturer based in Guangdong, China. Known for its smartphones, the company also makes MP3 players, portable media players, LCD-TVs, and DVD/Blu-ray players. It was founded in 2004. The company is also a smartphone maker. It has launched a whole range of Android powered smartphones. Oppo F3 Plus Design and Specs

The metal unibody feels very sturdy and its rounded edges make it easy to hold. Despite the soft-touch finish, user didn’t find the phone too slippery during their usage. The 6-inch display really dominates the front of the phone, thanks to thin borders on the sides. Striking looks aside, there’s still no getting around the fact that this is a big phone, and quite heavy too. The fingerprint sensor is quick for unlocking the device, and just like before, user can use it for other purposes like locking apps and files. There are backlit capacitive buttons on either side of it for navigation. The dual front cameras and sensors are at the top. The buttons on the sides are a bit of a reach, even for someone with large hands. The headphones socket, speaker and Micro-USB port are placed at the bottom. There’s a SIM tray above the power button, and is the hybrid type, so they will have to choose between a second SIM and a microSD card (up to 256GB is supported).

Coupled with the fact that it only pushes pixels inside a 6-inch 1920×1080 rectangle, then user can pretty much presume the CPU and GPU aren’t taxed unnecessarily. Here’s a rundown of those juicy specs: The 6-inch display on the Oppo F3 Plus looks sharp thanks to the full-HD resolution but colours are too heavily saturated which can make images look a bit unnatural. There’s no option in the Settings app to adjust this either. Touch response is good though, and the phone has Gorilla Glass 5 protecting the display.

The back of the phone is rather plain with just a slight bump for the camera breaking the flat surface. Oppo has tried something new with the design of its antenna bands here to give the F3 Plus some visual differentiation from the competition. At the end of the day, the OPPO F3 Plus will be judged by its camera, particularly the two on the front. After all, it calls itself a Selfie Expert, and this time it has two of them. The “main” front camera has a 16 megapixel 1/3-inch sensor with an f/2.0 aperture for taking in user’s regular selfie or two-fie. The other camera has a lower 8 megapixel count but a wider 120-degree angle lens which is better for packing in a larger crowd. The main rear camera isn’t as exciting but is by no means disappointing either. OPPO says it worked closely with Sony to develop an exclusive IMX398 sensor for it. That’s a 1.28-inch 16 megapixel sensor with a rather impressive f/1.7 aperture. Definitely larger than most smartphone cameras. Plus, it offers Dual Pixel PDAF for faster autofocus. The Oppo F3 Plus is equipped with a Qualcomm Snapdragon 652 653 SoC, 4GB of RAM, and 64GB of storage, which is a pretty solid set of specifications. Benchmark numbers might not be as good as what’s possibile with a top-end Snapdragon 821 SoC, which can be found in the OnePlus 3T at a similar price.

Other specifications include dual-band Wi-Fi b/g/n/ac, Bluetooth 4.1, GPS, USB-OTG, and the usual suite of sensors, including a gyroscope. Some notable omissions include FM radio and NFC. Many might not care about the latter but local radio is still important, and might be a deal breaker for some.

The software situation is a little disappointing as the F3 Plus still runs ColorOS 3.0 based on Android Marshmallow 6.0.1. On the bright side, Google Assistant is present, and it worked well on the phone. Pre-installed apps include the Google suite, Facebook, Instagram, and WPS Office. Oppo also has its own app store for those who couldn’t be bothered signing in to the Play Store. The F3 Plus features a ‘Lockscreen magazine’ which cycles through random wallpapers based on the categories user pick. This can be switched off if not needed. User also get motion and screen-off gestures and a backup service called O-Cloud for their contacts and SMSes.

It’s no AMOLED, but F3 Plus’ display is as bright and vibrant as any LCD panel can be. In all honesty, there isn’t much to be said about OPPO’s screens, which hasn’t exactly undergone massive changes in the past two years or so. It’s probably playing it safe by not changing a winning formula, but a screen size revolution is coming and OPPO might be caught unprepared.

The massive 4,000 mAh battery is, well massive. It’s definitely more than user’s average flagship smartphone, though it is on par with the OPPO F3 Plus’ equally massive size. Battery life isn’t exactly going to be a problem, especially considering the specs. With continued active use that included a mix of gaming, browsing, and Netflix binging, we got an average of 9 hours. The bottleneck for large batteries is usually the charging times, so thankfully OPPO included is VOOC Flash Charge tech. It would have been great, however, if it finally put its Super VOOC in an actual commercial device.