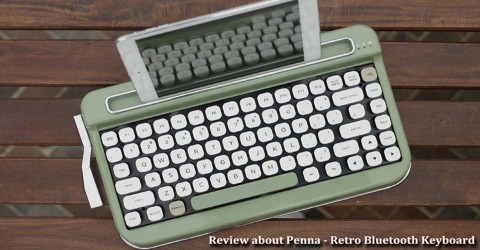 Penna is a retro Bluetooth keyboard that looks swiped from a typewriter. Typing anything more than a word or phrase on user’s tech device can be painful, which is why wireless Bluetooth keyboards continue to grow in popularity. Elretron is set to launch their very own version, known as Penna, with a vintage typewriter spin, and despite its retro look, it’s anything but antiquated. Besides functionality, Penna aims to provide a stylish design typewriter won’t mind leaving out on their desk or table. Many typists and writers romanticize the classic typewriter, and that has lead to various typewriter-esque keyboards over the years. Joining them is Penna, a Bluetooth keyboard that’ll appeal to even the most discerning hipster. The model looks very similar to a classic typewriter, but with some modern features including a built-in tablet stand and wireless connectivity.

Design and Feature about Penna

Penna can be used with both tablets and desktop computers, and it is demonstrated in multiple design schemes, including a modern-looking white option and a very retro wood option. The keys vary depending on the model — the retro version has traditional circular keys, for example — while the rest of the design is fairly static. As the video below shows, there’s a built-in stand for inserting a tablet. The Penna comes in two versions: the far nicer-looking, but presumably harder to type on chrome-edged circular typewriter keycaps, as well as a more conventional square-shaped version. The mechanical switches offer a choice between Cherry MX Blue, Red, or Brown options, depending on the level of resistance and “clickiness” that typists like from a keyboard. The keyboard itself comes in a choice of five colors. It’s a design that feels very similar to the Lofree, a similarly retro-styled keyboard that ultimately failed to live up to expectations.

The keyboard connects to systems using Bluetooth 4.2, and it can be registered with up to five devices at once. Penna supports the major operating systems, concluding iOS and Android, and runs for up to 6 months off a pair of AA batteries. Those who are particularly serious about looks can also pick up an optional pouch with a retro style and small pockets for things like pens. Three years in the making, Penna offers the feeling of a mechanical keyboard with keycaps that let typists or user’s know if they actually typed that letter or not, helping to reduce mistakes. The keyboard will be available with either Diamond Shape Keycaps (rounded corners give a smooth feeling and aim for more accurate typing) or Retro Chrome Keycaps (more like an old typewriter), depending on their preference. The keyboard layout is a standard QWERTY setup but with added features to adjust volume, brightness, etc.

An interesting bit that stands out on the Penna is the lever on the side, which would usually be used for moving the paper up a line and returning the carriage back to the start on a real typewriter.

The Penna keyboard even comes with a macro bar that has been designed to resemble a typewriter’s carriage return lever. Users can program this macro bar to do all sorts of things in a single press. If typists pull up the macro bar, it will remain in the position and record mode begins. If they type at this moment, it will be recorded.

If press down the bar, what they have type during the record mode will be saved and the bar will return to its original position, while the wait mode begins.

If typists press the bar downward slightly, it will return itself pop back up and saved key is transferred to the tablte PC.

Penna is designed to work with most Windows, Android, and iOS devices making it a great option for those looking to ease hand cramping. It will be available in Matt Black, Baby Pink, Olive Green, or Pure White.

It’s worth keeping in mind that Elretron is a first-time company that’s never shipped a product before, although the company already has working prototypes and claims to be ready for mass production following crowdfunding. Top-notch quality is guaranteed by employing Keycaps manufactured from a German company Cherry, known for having developed the highest technology in the industry.

Penna is being funded on the crowdfunding website Kickstarter, where the company behind it is seeking $50,000 USD in funding (with nearly double that amount raised). Those interested can get the early bird pack with a keyboard and user-specified switches/color for $89 USD. Shipping to backers is expected to start in August (2017).