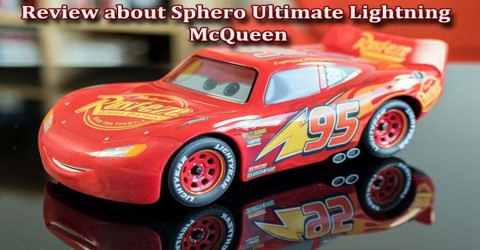 Sphero has released a whole lineup of robotic, Internet-connected toys; it remains best-known for its BB-8 droid from Star Wars: The Force Awakens. Today (24th May, 2017) it’s launching its next Disney tie-in — Ultimate Lightning McQueen. “As our partnership with Disney has evolved, we’ve been able to start to look at further properties within the Disney portfolio,” explained Product Manager Jenica Watts. (Sphero’s initial connection to Disney was as part of the Disney Accelerator.) “One of the teams had the opportunity to build an amazing, lifelike Lightning McQueen.”

This is a car that user can control from their iPhone or Android, based on the Owen Wilson-voiced character from Pixar’s Cars franchise. (Cars 3 is coming out on June 16.) Ultimate Lightning McQueen is available today for a price of $299. There’s a reason this is called the ‘Ultimate’ Lightning McQueen, though. The 10in model has unique motorised suspension that allows it to move just like the animated star of the Cars films. It’s also fitted with a custom – and unique – windscreen-shaped LCD screen that brings Lightning’s eyes to life. The animations are perfect.

And this is the first time a speaker has been built into a Sphero toy, and there’s even an animatronic mouth that moves as he speaks.

There’s also a feature that Sphero calls “emotive suspension.” That means Lightning doesn’t just drive around — his left and right sides also twitch up and down with excitement, and he’ll speak and move in response to taps on his roof, hood and doors.

The level of detail is excellent, down to the position of the charging socket which is where the petrol – or gas – cap should be. The car is mostly made of plastic, but the front bumper is rubber. This will absorb the impact of crashes better but more importantly, it allows Lightning’s animatronic mouth to move. Like Sphero’s other devices, including the SPRK+, user control the car through the app, which is available for Android and iOS. An on-screen joystick responds to how far they push it in any direction, making the car drive quicker the more it moves from the centre.

It takes a little practice because it’s not simply an on-screen version of an r/c controller. Pull it back and Lightning won’t reverse; instead it will try and drive in that direction by turning and continuing to drive forwards.

User can hold the reverse button and the car will go backwards in the direction they are moving the virtual stick. It’s intuitive if user thinks about it, but they have to un-learn what they already know about traditional r/c cars.

Another button makes McQueen do donuts – skidding around in tight circles. A third gives him a speed boost, but this is by no means a super-quick remote-controlled car. The built-in battery lasts for 40 minutes or so, which is longer than user might expect considering the screen and speaker.

As Bluetooth is used, there’s a range of about 30m – this is plenty. User can drive the car indoors and outdoors, but the smoother the surface the better. Donuts are best on wooden, laminate, concrete or tiled floors, but possible on short-pile carpet. As for his performance on the road, the smartphone app offers an intuitive interface for driving him around at speeds of up to 6 miles per hour, with support for reversing and drifting. Apart from driving, user can make Lightning say all his catchphrases (plus a load more). There’s a button on the driving screen user can press to make him say a random phrase, but a separate section lets it build up a ‘script’ of a selection of them plus engine noises. Each phrase (voiced by Owen Wilson) is accompanied by a different animation of the wheels and eyes. Plus, Lightning’s mouth moves in sync, too, which really adds to the wow factor.

The speaker is loud – useru can control the volume via the app – and the quality of the recordings is excellent.

There’s also a fun pit-stop game – a mini game that has you servicing race cars with fuel, oil and tyres. The parts scroll across the top and you have to tap them, then the appropriate part required on a car that’s arrived for a pit stop.

Lightning chimes in to tell user there’s an “Oil combo!” or “Don’t forget the gas” as they play. There’s also a movie watch-along mode where he’ll commentate while user watch the original Cars film. This wasn’t enabled in the version of the app we tried, so the mechanics of how he syncs his commentary with the film is unknown.