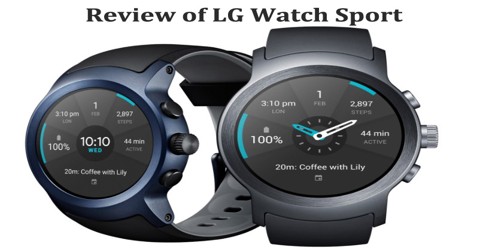 Android Wear 2.0 has finally arrived, and the first two devices to feature it are the LG Watch Sport and Watch Style. The LG Watch Sport is the brawny and brainy smartwatch that’s able to keep up with all of your gym workouts, and smart enough to make calls and use Google Assistant with or without your phone in tow. Users have only liked it better if it had longer battery life and more apps. With a solid list of high-end watch specifications, highlights include NFC for use with Android Pay, IP68 certification, LTE connectivity, and access to Google Assistant. To sum it, using the Watch Sport feels like having a smartphone attached to users wrist, and given its size, they might believe that’s the case at times.

The LG Watch Style is as close as it comes to a flagship Google smartwatch. It has top-of-the-line specs and launches with the latest version of Android Wear right out of the box. New LG Watch Sport availability information details have been added and new standalone apps have launching, including one for Uber.

The LG Watch Sport comes ready to play, offering more bells, whistles and watch faces than any other smartwatch or fitness tracker to date.

It’s a brawny-looking watch, built for fitness tracking thanks to a heart rate monitor, GPS chip, barometer and waterproof casing. User can even track strength training. Google to Apple: “Do you even lift?” Apple’s answer is “No.”

It measures 45.4 x 51.21mm on the wrist, around the same as the LG Watch Urbane. And while it’s not nearly as slim – rising 14.2mm in the air – its lugs are more gracefully contoured. It’s ergonomically designed – just not as much so as the LG Watch Style – where it needs to be, and, first and foremost, it maintains top performance. The underside of the watch stands tall on user’s wrist so that they won’t have to move it down on their wrist to get a good heart rating reading. The watch casing is also water-resistant, with its IP68 rating meaning it can survive 1.5 meters (about 5ft) underwater for up to 30 minutes. Only Pebble smartwatches beat that rating.

The LG Watch Style is the lightweight Android Wear 2.0 alternative to the more robust (in all ways) LG Watch Sport. It too has a circular screen, but it’s smaller, thinner and lets you swap out the bands. It’s a case of fashion over functionality, though; it doesn’t have all the sensors that are on board the Sport, and can’t track strength training or make cellular calls. Battery life on the LG Watch Sport is horrible. There’s no different method to say it. Fourteen hours of battery life for a sensible watch may be very disappointing. If user had been to exit after work, odds are they will have a lifeless watch in their wrist, incapable of displaying them the time, not to mention offering alerts and counting their steps — except, after all, they had been to take their charger to work with them and recharge in direction of the top of their work day.

Outside of battery life, the Watch Sport was quick and responsive when utilizing apps or scrolling by the Play Store. The LG Watch Sport is an expensive smartwatch, but since it also has better specs than your average watch – even the more expensive Apple Watch 2 – it’s a reasonable enough value.

It costs $349 in the US via the Google Store, and it’s available on contract at both AT&T and Verizon. AT&T charges $249 with a two-year contract that costs $10 a month, while Verizon prices it at a higher $329, but charges just $5 monthly for its two-year contract. Don’t be fooled: Verizon’s plan is cheaper in the long run.