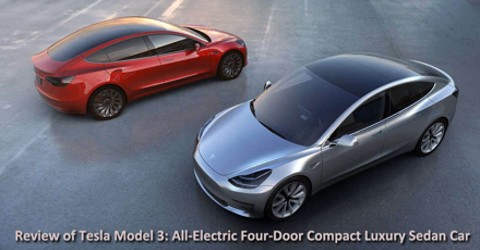 The latest vehicle to join Tesla’s growing portfolio is the Model 3 sedan, positioned as the most affordable car in the line. It was unveiled on March 31, 2016. With prices starting at $35,000, the Model 3 promises an EPA-rated 215-mile range, swift acceleration, and a full suite of standard advanced safety features. Like with the Model S, there will be a high-performance version with all-wheel drive. All Model 3s come equipped with the Autopilot driver-assist hardware that can be enabled with an over-the-air software upgrade. Sized to compete with the BMW 3 Series, the Model 3 seats five in its stark cabin. The dash is barren, with the exception of a massive, landscape-oriented touch screen. The new Tesla Model 3 is actually quite striking in person. The sleek car looks taut, like it’s ready to pounce. Yanking on the lever-actuated door handle (gone are the Model S’ electronically recessing units) opens the door to a welcoming cabin that feels futuristic and immediately familiar. You’ll find the two-spoke steering wheel and center console in the usual place, but otherwise the Tesla signature cabin has been reshuffled for the Model 3.

A 15-inch screen mounted in a landscape format on the center stack is the only option in the Model 3. It’s perfectly located to allow driver and passenger use, and it also appears to offer a newer version of Tesla’s infotainment software. Driver information including speed, range, and Autopilot status is located on the left side of the display, so it’s only a glance away from the road. It’ll probably take some getting used to, but the Model 3 also features a speedometer display on that enormous screen. From the side and back, the sedan Model 3 looks like a Model S with a very tall roof and a bobbed nose and tail. Up front, it has a blunt upturned snout that evokes the original Tesla Roadster as well as the new, sealed-up prow of the Model X. It is genetically linked to all of its ancestors—both in the styling and in the many pounds of lithium-ion batteries packed into the floor also, all but the Roadster have front and rear trunks. It owes a heavy debt to the other cars in Tesla’s lineup.

Built atop Tesla’s third-generation platform, the Model 3 is a compact four-door sedan aimed at well-established players in the luxury segment like the BMW 3 Series and the Mercedes-Benz C-Class. Visually, it takes Tesla’s striking design language in a new direction.

Its front end is characterized by a low hood, a feature made possible because an electric motor is markedly smaller than a gasoline- or diesel-burning engine. A tall, arched roof line clears up a generous amount of space for five passengers inside. The back end borrows styling cues such as horizontal lights connected by a strip of chrome trim from the bigger Model S and Model X, but it’s not a carbon copy of either. Tesla has avoided the Russian doll-type approach to drawing cars that its German competitors are stuck in. The finalized exterior and interior have yet to be revealed, so stay tuned for more updates on this front.

The Model 3 will easily keep up with the BMW 3 Series. The base model will hit 60 mph from a standstill in less than 6.0 seconds, while more powerful variants will perform the same task in under four seconds. Tesla has also confirmed the 3 will be available with the Ludicrous mode that cemented the S’ spot as the quickest series-produced car on the planet. Technology is an integral part of every Tesla, and the 3 won’t be any different. The production car’s interior hasn’t been revealed yet, but the company assures the car will be brimming with the latest and greatest tech features in the industry. A large, TV-like touch screen on the dashboard will group all of the car’s key functions into a single unit in order to reduce switchgear to the strict minimum. the 3 will come with Tesla’s Autopilot suite of electronic driving aids, meaning it will be able to change lanes, read speed limit signs, navigate freeway off-ramps, and brake if it detects a collision is imminent without any input from the driver. A solar roof will probably be offered as an option, Musk revealed on Twitter. Whether the panel will top up the battery pack or simply power accessories like the A/C is up in the air. The Model X’s undeniably cool falcon doors are unique on the market, but they’re to blame for a good chunk of the delays that plagued the crossover. Tesla admits it took a more conservative approach when developing the 3 – for example, the sedan won’t have self-extending door handles.

Still, Tesla Model 3 owners will be able to fold the rear seats flat in order to clear up 66 inches of space behind the front seats. Colloquially referred to as Camper Mode, the flat surface will turn the Model 3’s cabin into a tent, though taller passengers will need to sleep sideways. The 3 will be completely silent and vibration-free, like all electric cars, so it will be possible to run the A/C or the heater overnight if the battery pack has enough juice left in it.

In addition, the Model 3 will come with two trunks – one in the back right behind the rear seats, and one in the front called a frunk. It will also boast one of the most spacious cabins in its segment.

First impressions are promising. Mr. Musk is “fairly confident” that the first few Model 3s will be reaching a handful of customers toward the end of 2017.