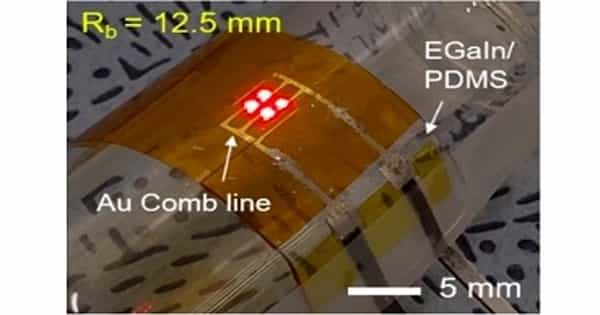 Stretchable Circuits for Deformable Devices and Displays are Interconnected

The main emerging trends in flexible and stretchable electronics are material synthesis, mechanical design, and fabrication strategies that use soft substrates. The most difficult challenge is that the entire electronic system must be capable of both bending and stretching. As a result, stretchable conductors have become an important construction unit for connecting the working circuits of various stretchable devices.

Electronic gadgets are evolving. Foldable phones, rollable electronic watches with wraparound displays, and extendable displays that widen their screens have entered our lives. Can a display that folds up like paper and fits in our pockets ever become a reality? The parts of such deformable devices must also be flexible. However, the core technology for an interface material that connects various parts remains unsecure. In response, a POSTECH research team recently developed a deformable conductive film that connects flexible electronic devices.

A deformable circuit board is required for stretchable devices such as stretchable displays, electronic skin, and implantable devices. Circuit boards that can be formed into various shapes necessitate a high degree of extensibility in many materials and components such as wirings, displays, sensors, and rechargeable energy supply devices such as batteries. So far, methods for connecting high-resolution circuits have included soldering, wire bonding, an anisotropic conductive film, and flip-chip bonding, but the issue of stably maintaining physical and electrical properties even when their shape is changed remains.

To that end, the researchers created an S-ACF by arranging metal particles at regular intervals in SEBS-g-MA, an extensible block copolymer that maintains strong interfacial adhesion while maintaining a stable electrical connection even when its shape is changed via chemical bonding with the substrates.

Maleic anhydride, which is present in SEBS-g-MA, in particular, enables chemical bonding between substrates, resulting in strong adhesion at low temperatures. The electrical and physical connection was effectively formed when the S-ACF was placed at the contact interface between the two substrates with a mild temperature (80°C) treatment for about 10 minutes, according to the researchers.

Furthermore, S-ACF can be selectively patterned so that particles are arranged in a desired part, which increases the polymer contact surface in an area that does not require an electrical connection to increase bonding strength and is cost-effective due to the reduced use of metal particles. This film adds stretchability to traditional anisotropic conductive films and enables high-resolution circuit connections (50m), low-temperature processing, and production scalability.

“This film enables connecting devices with more complex structures in the future,” said study leader Professor Unyong Jung. “I hope it will serve as a launchpad for integrating and manufacturing stretchable devices that have been independently studied” into a single substrate and integrated system, he added. If S-ACFs are produced in the future as tapes, wouldn’t it be possible to connect stretchable high-resolution circuits with a small piece of tape?

From 2014 to 2018, the Samsung Future Technology Development Project provided long-term support for the basic research on the arrangement of conductive microparticles, allowing the start-up to launch and the subsequent technology transfer. The project has recently been selected as a Materials & Components Technology Development Program by the Korea Evaluation Institute of Industrial Technology (KEIT) and is awaiting domestic production of high-precision anisotropic conductive films through additional research and development.

“We anticipate this research to be a prime example of a bold investment in basic research leading to commercialization,” said Professor Jeong. This study was made possible by the National Research Foundation of Korea’s Nano and Material Technology Development Program.