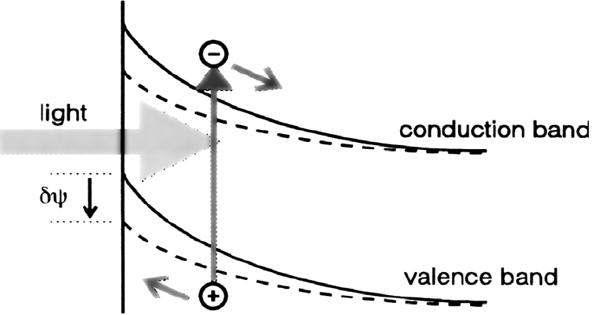 Surface photovoltage (SPV) measurements are a widely used method to determine the minority carrier diffusion length of semiconductors. This technique utilizes the change of the electrochemical potential in the space-charge region(s) of a semiconductor during excess carrier generation due to the illumination of the sample with light of suitable wavelength and intensity. Since the transport of minority, carriers determines the behavior of the p-n junctions that are ubiquitous in semiconductor devices, surface photovoltage data can be very helpful in understanding their performance. In the dynamic SPV method, the sample is illuminated by a monochromatic light pulse with high intensity.

Surface photovoltage measurements are performed by placing a wafer or sheet film of semiconducting material on a ground electrode and positioning a Kelvin probe a small distance above the sample. The sample that is to be examined is placed in an artificial metal-insulator-semiconductor (MIS) structure so that the change in surface photovoltage can be measured as a transient in the external circuit. The deeper in the semiconductor that carrier generation occurs, the fewer the number of minority carriers that will reach the surface and the smaller the photovoltage. There is no need for any time-consuming contact preparation on the samples, making the SPV method suitable for quick sample characterization. The measured photovoltage is kept constant at each wavelength by adjusting the light intensity. 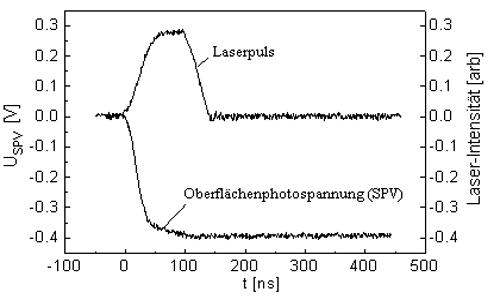 On a semiconductor whose spectral absorption coefficient is known, the minority carrier diffusion length can in principle be extracted from a measurement of photovoltage versus wavelength. According to the experimental conditions, the SPV method allows the analysis of a multitude of different semiconductor parameters, such as carrier lifetime, band bending, and the density of interface states. The optical properties of a novel semiconductor may not be well known or may not be homogeneous across the sample. Typically SPV measurements are done in an AC-coupled fashion using a chopped light source rather than a vibrating Kelvin probe. In the static SPV method, the sample is illuminated with monochromatic light and tunable wavelength.

The minority carrier diffusion length is critical in determining the performance of devices such as photoconducting detectors and bipolar transistors. In both cases, the ratio of the diffusion length to the device dimensions determines the gain. In photovoltaic devices, photodiodes, and field-effect transistors, the drift behavior due to built-in fields is more important under typical conditions than the diffusive behavior. It’s possible to measure at room temperature as well as at temperatures down to 90 K with this setup. SPV and photoluminescence can be measured at the same time, too.