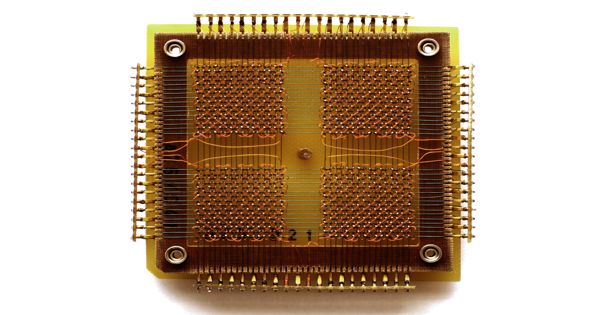 Twistor memory is a type of computer memory that predated modern-day RAM and was eventually replaced by it. It is a form of computer memory formed by wrapping magnetic tape around a current-carrying wire. It uses the magnetic tape to store patterns. Operationally, twistor was very similar to core memory. A variant of twistor memory called piggyback twistor can also be used as ROM.

Twistor is a form of computer memory formed by wrapping magnetic tape around a current-carrying wire. Operationally, twistor was very similar to core memory.

Twistor memory is similar to core memory. Twistor could also be used to make ROM memories, including a re-programmable form known as piggyback twistor. Both forms were able to be manufactured using automated processes, which was expected to lead to much lower production costs than core-based systems. The tape was wrapped around one set of the wires, say X, in such a way that it formed a 45 degree helix. The Y wires were replaced by solenoids wrapping a number of twisor wires. Selection of a particular bit was the same as in core, with one X and Y line being powered, generating a field at 45 degrees.

Twistor memory was introduced in 1957 and used through the mid-1970s. Introduced by Bell Labs in 1957, the first commercial use was in their 1ESS switch which went into operation in 1965. The development of Twistor Memory by Bell Labs would later lead to another short-lived magnetic memory technology in the 1980’s know as Bubble Memory.

It was developed at Bell Labs, but it was used for only a brief time in the marketplace between 1968 and the mid-1970s. Twistor was used only briefly in the late 1960s and early 1970s, when semiconductor memory devices replaced almost all earlier memory systems.

Twistor memory used the same concept as core memory, but instead of small circular magnets, it used magnetic tape to store the patterns. The basic ideas behind twistor also led to the development of bubble memory, although this had a similarly short commercial lifespan. Twistor Memory technology used a grid of very thin magnetic wires interwoven with copper wires that conducted electrical current. Twistor could also be used to make ROM memories, including a re-programmable form known as piggyback twistor. Each intersection of the grid represented one bit of computer memory.