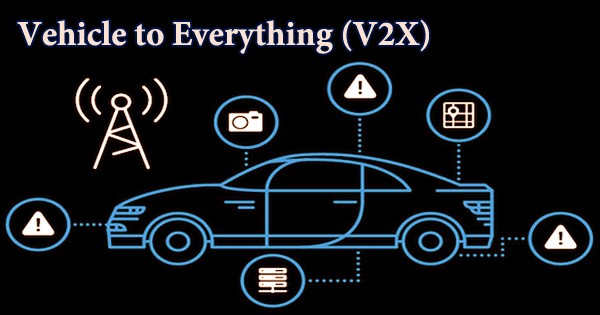 Vehicle to Everything (V2X)

V2X can generate realistic, real-time images of all road users in a given region, including vulnerable road users, and provide autonomous cars with vision beyond sight. Road safety, traffic efficiency, and energy savings are the primary objectives behind V2X. It includes numerous components and is also known as connected-vehicle-to-everything connectivity.

The National Highway Traffic Safety Administration (NHTSA) in the United States predicts that using V2X technology will reduce traffic accidents across the country. There are two types of V2X communication technology depending on the underlying technology being used: (1) WLAN-based, and (2) cellular-based. V2X is primarily utilized to improve safety, but it also has other advantages, such as the ability to automate toll payments.

In 2010, the Institute of Electrical and Electronics Engineers (IEEE) issued the WLAN-based V2X (IEEE 802.11p) specification for the first time. It enables vehicle-to-vehicle (V2V) and vehicle-to-infrastructure (V2I) communication (V2I). Increased road safety, fuel savings, traffic efficiency, and improved road management are among the major advantages of V2X systems. Dedicated Short Range Communication (DSRC) is the name given to this technology. The underlying radio connectivity offered by 802.11p is used by DSRC.

In a conventional car, V2X systems can alert the driver about bad weather, nearby accidents, road conditions, and the potentially harmful behaviors of adjacent vehicles. V2X adds additional information to the vehicle’s existing navigation system in autonomous cars. Failure to properly deploy V2X, on the other hand, might deprive communities with restricted budgets of vital investment money. Worse still, it may pose significant security concerns to linked cars and people in their vicinity.

The technology enhances the driver’s awareness of possible risks by exchanging information such as the speed with other entities around the car. This helps to decrease the severity of injuries, road accident deaths, and collisions with other vehicles. Toyota was the first carmaker in the world to launch V2X-enabled vehicles in 2016. These cars are exclusively available in Japan and employ DSRC technology. GM was the second carmaker to offer V2X in 2017. In the United States, GM produces a Cadillac model that has DSRC V2X. Additionally, the technology improves traffic efficiency by alerting vehicles to impending gridlock, proposing other routes to avoid traffic, and finding vacant parking spots.

To connect with compatible systems, V2X employs a short-range wireless signal that is resistant to interference and bad weather. A European automaker indicated in December 2017 that V2X technology based on 802.11p will be used in 2019. V2X technology may also be used for other reasons, such as integrating automatic payments for tolls, parking, and other levies. When two V2X senders come within range of each other, the original V2X communication employs WLAN technology and operates directly between vehicles and vehicles (V2V) and traffic infrastructure (V2I), forming a vehicular ad-hoc network.

The V2X-enabled smart city is still primarily a theoretical idea, but with more trials underway, partnerships forming, and regulators coming together, now is the moment for the sector to establish strong foundations. When V2X systems are linked with regular automobiles, drivers can get critical information about weather patterns, local accidents, road conditions, roadwork warnings, emergency vehicles coming, and the actions of other drivers on the road. More recent V2X communication uses cellular networks and is called cellular V2X (or C-V2X) to differentiate it from the WLAN-based V2X.

The V2X market is still in its early stages, and many of the system’s advantages will not be recognized until the market matures. A V2X car can only connect with another V2X vehicle or a roadside object that also uses V2X technology. Several industry groups, such as the 5G Automotive Association (5GAA), have advocated for C-V2X because of its benefits over WLAN-based V2X. (without considering disadvantages at the same time). Autonomous vehicles using V2X systems may be able to offer additional information to the vehicle’s existing navigation system.

The technologies also enable autonomous cars to scan their surroundings and make quick judgments based on the information they collect. Many traffic systems lack V2X systems, preventing cars equipped with the technology from communicating with them. Vehicles are projected to be able to interact not just with traffic systems, but also with bicycles and pedestrians who have V2X devices as V2X systems become more prevalent. Cellular V2X mode 4 communication relies on a distributed resource allocation approach, specifically sensing-based semipersistent scheduling, which arranges radio resources in each user equipment (UE) in a stand-alone way.

Vehicles are also getting more sophisticated, with technologies that require less human intervention. As a consequence of the adaptive cruise control and sensors, consumers benefit from safer, greener travels with lower carbon emissions. While the 3GPP specifies the data transport characteristics that allow V2X, it does not contain V2X semantic content and instead recommends that ITS-G5 standards such as CAM, DENM, BSM, and others be used instead of the 3GPP V2X data transport features. Many leading V2X vendors, including as Delphi, Denso, Qualcomm, and Continental, have large-scale integration plans, so vehicle-to-everything technology is projected to develop considerably over the next 20 years.

Many modern automobile models, particularly luxury manufacturers, employ V2X technology in some way. Vehicle-to-everything technologies are likely to be included in lower-cost automobiles in the future. However, the full benefits of V2X systems will take time to materialize since a vehicle must interact with an entity that is equipped with V2X technology in order for the vehicle to speak with that entity. Through its instant communication, V2X allows road safety applications such as (non-exhaustive list):

Vehicle-to-everything technology will be especially important in autonomous cars, which will monitor their immediate environment for dangers and make decisions based on that information. Vehicles outfitted with V2X systems will be able to interact with other vehicles, traffic systems, and other road users such as bicycles as the V2X industry grows. V2X systems can also withstand the severe weather that affects autonomous cars. One of the most appealing features of Cellular V2X is that it offers a variety of operational modes from which customers may pick.