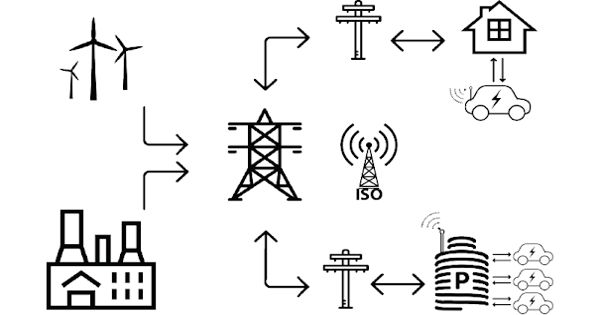 Vehicle-to-grid (V2G) would allow consumers to charge electric vehicles and monitor their energy costs, using mobile devices. V2G describes a system in which plug-in electric vehicles, such as battery electric vehicles (BEV), plug-in hybrids (PHEV), or hydrogen fuel cell electric vehicles (FCEV), communicate with the power grid to sell demand response services by either returning electricity to the grid or by throttling their charging rate. With vehicle-to-grid technology, a car battery can be charged and discharged based on different signals — such as energy production or consumption nearby. V2G storage capabilities can enable EVs to store and discharge electricity generated from renewable energy sources such as solar and wind, with output that fluctuates depending on weather and time of day. Electric vehicle batteries are by far the most cost-efficient form of energy storage since they require no additional investments in hardware.

V2G can be used with gridable vehicles, that is, plug-in electric vehicles (BEV and PHEV), with grid capacity. When it comes to using V2G in practice, the most important thing is to make sure that EV drivers have enough energy in their car batteries when they need it. Since at any given time 95 percent of cars are parked, the batteries in electric vehicles could be used to let electricity flow from the car to the electric distribution network and back. When using smart charging, the possibility of balancing the grid ends when the battery is fully charged.

V2G helps balance out electricity demand and avoid any unnecessary costs for building an electricity system. A 2015 report on potential earnings associated with V2G found that with proper regulatory support, vehicle owners could earn $454, $394, and $318 per year depending on whether their average daily drive was 32, 64, or 97 km (20, 40, or 60 miles), respectively. The growth of electric vehicles and the smart grid has lead to the creation of vehicle-to-grid (V2G) technology.

Vehicle-to-grid, as well as other smart energy management features, helps enable electric vehicle charging anywhere, regardless of the surroundings, location, or premise. Batteries have a finite number of charging cycles, as well as a shelf-life, therefore using vehicles as grid storage can impact battery longevity. Studies that cycle batteries two or more times per day have shown large decreases in capacity and greatly shortened life. For example, a home that uses solar power cannot generate electricity at night, but an electric vehicle could provide a secondary source of power if needed. However, battery capacity is a complex function of factors such as battery chemistry, charging and discharging rate, temperature, state of charge, and age.  V2G enables energy companies to play ping pong with electricity in the grid.