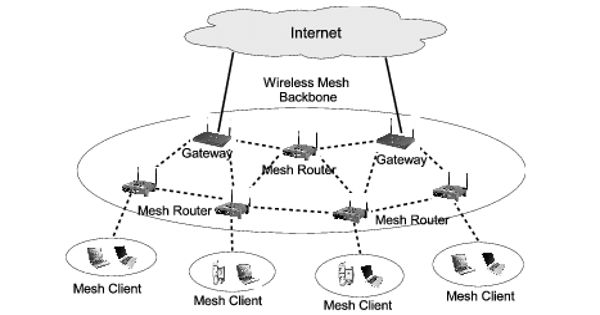 A wireless mesh network (WMN) is a multihop wireless network formed by a number of stationary wireless mesh routers. It is a communications network made up of radio nodes organized in a mesh topology. The network includes devices like nodes, clients, routers, gateways, etc. It can also be a form of wireless ad hoc network. These routers are connected wirelessly using a mesh-like backbone structure.

Wireless mesh networks (WMNs) are communication networks that comprise radio nodes in which nodes are arranged in a mesh topology.

A mesh refers to rich interconnection among devices or nodes. Wireless mesh networks often consist of mesh clients, mesh routers, and gateways. Some of the routers function as a wireless access point for clients (e.g., laptops and smart devices with wireless access) to attach themselves to the network. The mobility of nodes is less frequent. If nodes constantly or frequently move, the mesh spends more time updating routes than delivering data. As the nodes are fully connected, mesh networks are usually less mobile as rerouting is less difficult in predicting the reroute results in delays in data transmission.

In a wireless mesh network, topology tends to be more static, so that route computation can converge and delivery of data to their destinations can occur. The clients transmit and receive data via the backbone mesh network. Hence, this is a low-mobility centralized form of wireless ad hoc network. To connect to external networks such as the Internet, one or more routers are connected to the wired network and serve as gateways.

Mesh clients are often laptops, cell phones, and other wireless devices. A wireless mesh network is made up of two or more wireless radios working together to share routing protocols in order to create an interconnected RF pathway. Mesh routers forward traffic to and from the gateways, which may, but need not, be connected to the Internet. The coverage area of all radio nodes working as a single network is sometimes called a mesh cloud.

Wireless mesh networking includes three types of topologies based on requirements and LOS. Those three solutions are:

A mesh network is reliable and offers redundancy. A wireless mesh network, no matter how many radios it includes, creates only a single name identifier, or Single Set Identifier (SSID) and could also create a single IP address for the entire mesh, clearly distinguishing the mesh from another wireless or mesh network. When one node can no longer operate, the rest of the nodes can still communicate with each other, directly or through one or more intermediate nodes. Wireless mesh networks can self-form and self-heal. All of them are directly associated with the new wireless router layer, which makes them different from the conventional pure wireless access networks.