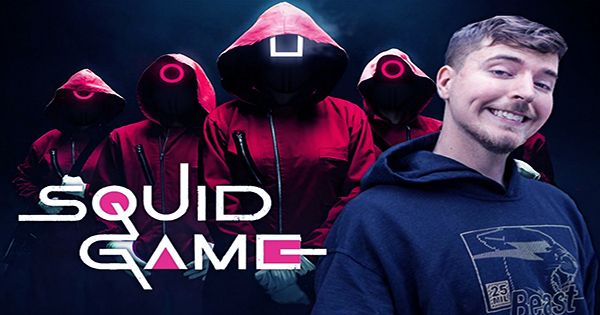 MrBeast, a YouTuber, has made a video based on the program Squid Game. The affluent elite makes underprivileged people compete for billions of dollars in the Korean Netflix series. The 456 participants, just as on the show, had a chance to win the whole reward pool if they could make it through all of the children’s activities set up for them. Unlike the show, there was virtually little risk of anyone dying while doing it. When a competitor was “killed,” instead of dying, a blood pack linked to them exploded, announcing their removal from the games.

The sets were meticulously reproduced at a cost of roughly $2 million, with an additional $1.5 million allocated to prize money. Though the gaming sets were acclaimed for their authenticity and a large number of people enjoyed the movie on YouTube, it was not without its critics. MrBeast was accused of being “tone-deaf” to others for missing the TV show’s message.

The notorious “tug of war” held over a large tub of foam for safety reasons, the same foam pit that would rescue participants from falling from the glass bridge game. Because their lives were not on the line, the candidates took the approach that is a little more reasonable to the task than their fictional counterparts are, and no one was thrown over the brink. They waited so long, however, that four players were unable to complete the game within the time restriction.

Despite this, they ended up with six survivors for the final game, which makes a lot of sense mathematically. If you figure it out, which many people have, you can anticipate each player to pass on information approximately two steps up the bridge, implying that by the time you get to play 10, they will most likely be alive.

If they played it without emotion and with flawless recollection, they would have a 75% chance of completing it through with 10 fatalities or fewer, leaving just six individuals to face the final challenge. Because the rules of the original game were not generally recognized outside of South Korea, the final game was a round of musical chairs rather than the title Squid Game. The game won by number 079, who took home $456,000 in prize money.