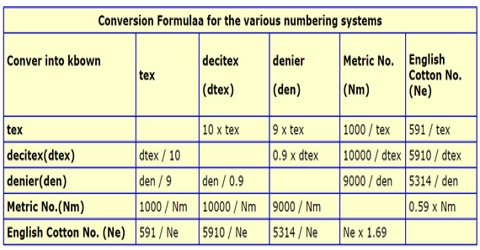 Main focus of this Assignment is given about the yarn count, System of Count Numbering, Analytical System, Quadrant Balance, Beesley Balance, Stubb Yarn Balance, Conversion of Yarn Count and several ways how to convert yarn count measurement with examples.

The count is nothing but a numerical expression which defines the thinness or thickness of a yarn. It means that, the yarn count refers how much a yarn is fine or course. We also can say that the yarn count number indicates the length of yarn in relation to the weight.

But according to the Textile Institute, they define yarn count as “A number indicating the mass per unit length or length per unit mass of a yarn”.

Different sorts of system or units are used to measuring the yarn count or yarn number which mostly depends on the material used for preparing the yarn and the area where it was manufactured.

All the system of count measuring can be grouped as following categories;

Actually this process is consisting with some other systems based on several calculations and this is why it is called Analytical system. The systems are including;

In this system, the count of the yarn is the number of units of weight per unit length of yarn. This system is mostly used for silk, jute etc.

We can work in this system by following categories;

Here is the equation for determining the yarn count in Tex;

An extra qualification of Tex system we know that it is known as the universal process of yarn count which is introduce by International Standard Organization (ISO) with several textile scientists, technologists and manufacturers.

It is defined as the weight of yarn thread in grams presented in per 9000 meter length of that yarn. It is just like about Tex system only has to change the unit length from 1000m to 9000m and then the equation of denier becomes as;

The weight of yarn of 1 lb present in 14400 yds length of yarn is known as jute count or pounds per spindle.

This is also having some sub-system as following;

Actually by the term cotton count can be defined as the number of hanks of 840 yds presented in 1 lb weight of yarn. This is also known as British or English count. It is denoted by Ne

The equation of cotton count measurement is as following;

Now for an example, if we consider a yarn sample of 2000 yds with a weight of 0.08 lb then the cotton count will be

Metric count is express 1000 gm or 1 kg weight of yarn can contains how many numbers of hanks of 1000 meter. It is denoted by Nm.

The formula of measuring metric count is;

For example, if we consider a yarn of 2000m having the weight of 450g. So the count in metric system will be

It is the number of hanks of 560 yds presented in 1 lb weight of yarn is known as worsted count which is widely used for yarn composed by wool.

By this process count of yarn is measured by using different sorts of instrument where any kind of calculation is not needed and we can get directly the yarn count. The machines which are mostly used of count measurement are given bellow;

This balance is consisting with the following parts;

A pillar is used to hold all the parts and the quadrant scale is attached with the pillar by a pivote.

Another pivote hold a pointer which mark the reading on the scale.

The same pivote holds a beam which has a sample hook at one end and a counter weight in another.

At the base of the balance there is a leveling screw by which we can leveled the instrument.

Finally when we put the sample in the sample hook adjusting with the counter weight the pointer show the count of yarn directly on the scale.

Beesley balance is widely used for measuring the yarn count removed from a fabric sample. This is work on the principal of fixed length and fixed weight system.

The Beesley balance is consisting by the following parts;

This balance is stands on a base where a leveling screw is present which is used to level the instrument and if it is leveled the pointer, at one end of the beam, will equal to the datum line.

The beam is attached with the pillar by a pivot and there is a hook at the opposite site of the pointer at the beam which holds the sample.

This Stubb yarn balance consists of a pillar, at the top of which. A beam is pivoted on a knife edge. A sample hook is attached at one end of the beam and a weight hook at the other end. A template is used to cut the yarn in fixed length. Different weight hook is used for different yarn.

After selecting the weight hook the yarn to be measured is suspend at the sample hook until the balance becomes at balance position. Thus the number of thread used to balance the beam gives the count of the yarn.

This is a very simple instrument and there is no mechanism which goes out of order and don’t need any electrical or other extra energy.

We can convert the value of count from one to other system by followings only some formulas. So for the conversion we may divide them in four groups as following;

The table of converting factor and the count constant is given billow;

Indirect to Indirect & Direct to Direct

An increasingly important branch of textile technology is the geometry of fabric structure, which is mostly depends upon the yarn structure. As a result of yarn structure the appearance, hands feel and some other general behaviour can be changed. Here the term yarn structure indicates the fineness or coarseness of yarn. So it is necessary to develop our knowledge about yarn count before starting work not only for yarn but in the textile world.