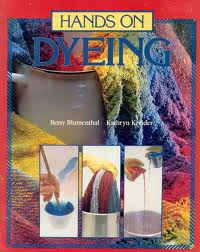 A number of other classes have also been established, including:

By the nature of their chromophore, dyes are divided into:[8]

The process “vat dyeing” refers to dyeing in a bucket or vat. It can be performed whenever a liquid, even shade over the entire garment is desired. Almost any dye can be used, including fiber reactive dyes, direct dyes, and acid dyes. One alternative to vat dyeing is direct dye application, such as the process used for tie dyeing. “Vat dyes” are a special class of dyes that work with a special chemistry. Cotton, wool, and other fibers can be all dyed with vat dyes. Note that not all vat dyeing is done with vat dyes.

Most vat dyes are less suitable than fiber reactive dyes for the home dyers, as they are difficult to work with; they require a reducing agent to solubilize them. The dye is soluble only in its reduced (oxygen-free) form. The fiber is immersed repeatedly in this oxygen-free dyebath, then exposed to the air, whereupon the water-soluble reduced form changes color as oxygen turns it to the water-insoluble form. Indigo is an example of this dye class; it changes from yellow, in the dyebath, to green and then blue as the air hits it.

Inkodye is a type of vat dye which uses light rather than oxygen to ‘fix’ the dye, with a wide variety of possible effects. These dyes, which are chemically similar to vat dyes, are developed by light instead of being applied in an oxygen-free bath and being developed in the fabric by exposure to oxygen. Inkodyes are true dyes, not fabric paints. A dye itself attaches to the fabric; fabric paint includes a glue-like binder, which imparts a stiffer feeling to the fabric. The process is more difficult than the process of tie-dyeing with fiber reactive dyes.

PRO Chemical & Dye, which sells some vat dyes, provides instructions online for Immersion Dyeing using PRO Vat Dyes. The process requires the use of lye (sodium hydroxide), which must be used with due care, including the use of safety goggles.

Indigo is subject to major crocking (rubbing the dye off onto other items) unless it is applied carefully. This means use a weaker dyebath, and dipping many times, rather than a single strong dipping.

Application of vat dyestuff is not so easy like direct or reactive dyes. The application involves a lot of chemistry – such as oxidation, reduction, pH control and so on. Even the dissolution of the dyestuff involves a great technique of reduction using adequate quantities of caustic soda and sodium hydrosulphite.

There are several methods available for the application of vat dyes to yarn and fabric.

The Vat dyes are having all around fastness properties which cannot be possible in any class of dyes .the only problem in this class is slightly poor rubbing fastness.which can be increased by special after treatment.

Indigo is a vat dye that has been used around the world for many centuries.