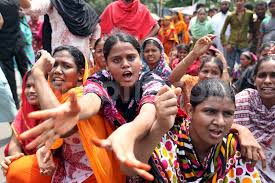 Legal Regime for the Protection of Rights of Garment Workers

Legal Regime for the protection of Rights of Garment workers

This is an important chapter of my research .In this chapter I discussed about Constitutional value of the Bangladesh garments workers, how the rights of the garments workers are protected under various laws.

Protection of the rights of the garment workers under Constitution

The rights of the workers have been given and also protected by the Constitution of Bangladesh.  It shall be a fundamental responsibility of the State to emancipate the toiling masses the peasants and workers and backward sections of the people from all forms of exploitation.[19] That the garment workers can be saved to their rights by this provision. Though this is not enforceable by the court, no one can violate this right. The State shall Endeavour to ensure equality of opportunity to all citizens. The State shall adopt effective measures to remove social and economic inequality between man and man and to ensure the equitable distribution of wealth among citizens, and of opportunities in order to attain a uniform level of economic development throughout the Republic. The State Shall Endeavour to ensure equality of opportunity and participation of women in all spheres of national life.[20] Work is a right, a duty and a matter of honour for every citizen who is capable of working and everyone shall be paid for his work on the basis of the principle “from each according to his abilities, to each according to his work”. The State shall Endeavour to create conditions in which, as a general principle, persons shall not be able to enjoy unearned incomes, and in which human labour in every form, intellectual and physical, shall become a fuller expression of creative Endeavour and of the human personality.[21] All citizens are equal before law and are entitled to equal protection of law[22] in every place. Here shall be equality of opportunity for all citizens in respect of employment or office in the service of the Republic. No citizen shall, on grounds only of religion, race, caste, sex or place of birth, be ineligible for, or discriminated against in respect of, any employment or office in the service of the Republic. Nothing in this article shall prevent the State from making special provision in favors of any backward section of citizens for the purpose of securing their adequate representation in the service of the Republic; giving effect to any law which makes provision for reserving appointments relating to any religious or denominational institution to persons of that religion or denomination; reserving for members of one sex any class of employment or office on the ground that it is considered by its nature to be unsuited to members of the opposite sex.[23] All forms of forced labour are prohibited and any contravention of this provision shall be an offence punishable in accordance with law. [24] Every citizen possessing such qualifications, if any, as may be prescribed by law in relation to his profession, occupation, trade or business shall have the right to enter upon any lawful profession or occupation, and to conduct any lawful trade or business.[25] If those rights are violated the worker can go to The High Court Division for enforcement these rights.

Accessible to workers at all times while they are in the establishment. (b) Such latrines and urinals shall be provided separately for male and female workers; (c) such latrines and urinals shall be adequately lighted and ventilated; (d) all such latrines and urinals shall be maintained in a clean and sanitary condition at all times with suitable detergents and disinfectants. In every establishment there shall be provided, at convenient places, sufficient number of dust beans and spittoons which shall be maintained in a clean and hygienic condition. No person shall throw any dirt or spit within the premises of an establishment except in the dust beans and spittoons provided for the purpose. A notice containing this provision and the penalty for its violation shall be prominently displayed at suitable places in the premises. The Government may, in respect of any manufacturing process carried on in any establishment, by rules, require that effective screens of suitable goggles shall be provided for the protection of persons employed on, or in the immediate vicinity of a process which involves- (a) risk of injury to the eyes from particles or fragments thrown off in the course of the process, or (b) risk to the eyes by reason of exposure to excessive light or heat.[35] When any accident occurs in an establishment causing loss of life or bodily injury, or when an accidental explosion, ignition, outbreak of fire or irruption, outbreak of fire or irruption of water or fumes occurs in an establishment, the employer of the establishment shall give notice of the occurrence to the Inspector within two working days. Where an accident mentioned causes bodily injury resulting in the compulsory absence from work of the person injured for a period exceeding forty eight hours it shall be entered in a register in the prescribed from. A copy of the entries in the register referred to in sub-section shall be sent by the employer of the establishment, within fifteen days after the 30th day of june and the 31st day of December in each year, to the chief Inspector. Where in an establishment, any dangerous occurrence of such nature as may be prescribed, occurs, whether causing any bodily injury or not, the employer of the establishment shall send notice thereof the Inspector within three working days.[36] there shall, in every establishment be provided and maintained, so as to be readily accessible during all working hours first-aid boxes or cupboards equipped with the contents prescribed by rules. The number of such boxes or cupboards shall not be less than one for every one hundred fifty workers ordinarily employed in the establishment. Every first-aid box or cupboard shall be kept in charge of a responsible person who is trained in first-aid treatment and who shall always be available during the working hours of the establishment. A notice shall be affixed in every work-room stating the name of person in charge of the first and box or cupboard provided in respect of that room and such person shall wear a badge so as to facilitate identification. In every establishment wherein three hundred or more workers are ordinarily employed, there shall be provided and maintained a sick room with dispensary of the prescribed size, containing the prescribed equipment or similar facilities, in the charge of such medical and nursing staff as may be prescribed.[37] In every establishment, wherein forty or more workers are ordinarily employed, thee shall be provided and maintained a suitable room or rooms for the use of children under the age of six years of such women. Such rooms shall provide adequate accommodation, adequately lighted and ventilated and maintained in a clean and sanitary condition and shall be under the charge of woman trained or experienced in the care of children and infants. Such rooms shall be conveniently accessible to the mothers o the children accommodated therein and so far as is reasonably practicable they shall not be situated in close proximity to an part of the establishment where obnoxious fumes, dust or odors are given off or in which excessively noisy processes are carried on. Such rooms shall be solidly constructed and all the walls and roof shall be of suitable heat resisting materials and shall be water-proof. The height of such rooms shall not be less than 360cm from the floor to the lowest part of the roof and there shall be not less than 600sq. cm of floor area for each child to be accommodated. Effective and suitable provisions shall be made in every part of such room for scuring and maintaining adequate ventilation by the circulation of fresh air. Such rooms shall be adequately furnished and equipped and in particular there shall be one suitable cot or cradle with necessary bedding for each child, at least one chair or equivalent seating accommodation for the use of each mother while she is feeding or attending to her child and a sufficient supply of suitable toys for the older children. A suitable fenced and shady open air ply-ground shall be provided for the older children; Provided that the chief Inspector may, by order in writing, exempt any establishment from compliance with this sub-rule if he is satisfied that there is not sufficient space available for the provision of such a playground.[38] No adult worker shall ordinarily be required or allowed to work in an establishment for more than forty-eight hours in any week. Subject to the provisions of section 108, an adult worker may work for more than forty-eight hours in a week: Provided that the total hours of work of an adult worker shall not exceed sixty hours in any week and on the average fifty-six hours per week in any year:

Provided further that in the case of a worker employed in an establishment which is a road transport service, the total hours or overtime work in any year shall not exceed one hundred and fifty hours. Provided further that the government, if satisfied that in public interest or in the interest of economic development such exemption or relaxation is necessary, in certain industries, by order in writing under specific terms and conditions, may relax the provision of this section or exempt, for a maximum period of six months, from the provision of this section at a time.[39] An establishment in the private sector may constitute for the benefits of its worker a provident fund. Such provident fund shall be constituted in such manner as may be prescribed by rules made by the establishment in this behalf under section 3. Notwithstanding any thing contained in sub-section 920, the Government may make rules for constitution of provident funds for workers employed in establishments in private sector, and where such rules are made each establishment to which the rules apply, shall comply with the

requirements of such rules. Such provident fund shall b e held and administered b y a board of trustees.  Such board of trustees shall consist of an equal number of representatives of the employer and workers employed in the establishment, and a person nominated by the government shall be its chairman. The representatives of the employer shall be nominated by the employer, and the representative of the workers shall be nominated by the collective bargaining agent. Where there is no collective bargaining agent in an establishment, the representatives of the worker shall be elected by the workers under the supervision of the director of labour. All the representatives shall hold office for a period of two years. provided that they shall continue to hold office until their successors enter upon office. Every permanent worker shall, after the completion of hsi one year of service in the establishment constituting the provident fund, subscribe to the fund, every month, a sum, unless otherwise mutually agreed, not less than seven per cent and not more than eight per cent of his monthly basic wages. and the employer shall contribute to it an equal amount.[40]

There are lots of laws for the protection of rights of garments workers in Bangladesh. But it not enforcement in proper way, in my research I try to analysis it with very carefully.