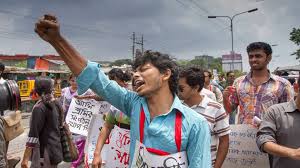 Rights of Garments Workers in Bangladesh

The garment industry is by far the country’s most important manufacturer, earning around $5 billion annually and accounting for about two thirds of all exports. Bangladesh has about 2,500 garment factories with up to 10 million livelihoods dependent on it directly or indirectly. About 80 per cent of garment workers are women. The Ready Made Garments sector has more potential than any other sector to contribute to the reduction of poverty. Despite the phenomenal success of the RMG sector the working conditions and wages of workers in the industry are cause for serious concern. Bangladesh’s current position as a leading garments exporting nation needs to be consolidated. The economy-wide reverberations of failure would be disastrous. We believe it is in everybody’s interest to sustain this industry – an industry which changed the lives of so many people, particularly women, in Bangladesh. The problems in the industry pre-date the riots which took place just over a month ago and which were attended by deaths, injuries and the destruction of property. Over the years, hazardous working conditions have resulted in the deaths of many workers through factory fires and collapses. The Spectrum Factory building collapse of April 2005 killed 64 people, injured over 70 and left hundreds jobless. In February 2006 a fire destroyed the four-story KTS Textile Industries in Bangladesh’s port city of Chittagong again killing scores of mostly young and female workers. Workers, who are mostly young women, also face an acutely difficult working environment – wages are low, hours are long, forced labour is practiced, child labour exists, sexual harassment exists, freedom is curtailed, whether it be locked doors or rights of association, and there are a multititude of other practices which go against international labour standards and codes of conduct . At the level of legislation and business dealings, lack of implementation of laws, restrictive laws and unfair buying practices by buyers compound the issue of non-compliance. Above this aspect my research paper I discuss various problems of the garments worker, their life style, the concept of rights of garments workers and various reasons violation of rights of garments workers.

The Garment industry is the most important source of foreign currency. Bangladesh has about 2,500 garment factories and 10 million people are dependent one it directly or indirectly an about 80 percent garment workers are woman. The garments sector has become an important institution for reduction of poverty. But the workers face many problems during working time and outside. The main problems faced by garments worker are:-

Negative outlook to them of the society.

The research has the following objectives:-

To clarify the concept of rights Garment workers.

To examine the legal reasons for the protection of rights of garment workers.

To evaluate the measure for enforcement of rights of garment workers.

The present study explores the challenges of rights of garment workers in Bangladesh. It is exploratory in nature based on a qualitative approach. The study also uses context analysis and survey methods for collecting data and information.

Those data and information collected from primary and secondary source. Primary sources are:-

Importance of the Research:-

Some of the book are Article published different are review below­-

This book is not sufficient to know deeply about the Labour Laws. This book has not explanation the right of freedom of speech. There is no explanation to the section. Explanation should be added for clear explanation.

This book is very helpful for the students because it has clear explanation, comment and note of the section.

The concept of The Rights of Garment Workers.

This chapter is mainly discussed about the concept of rights of garment workers in Bangladesh. In this research we must know some concepts which are given bellow:

Sewing is the craft of fastening or attaching objects using stitches made with needle and thread. Sewing is one of the oldest of the textile arts, arising in the Paleolithic Era. There are many definitions of garment workers as are-

Rights of the Garment workers in Bangladesh:

Following rights of the Garments workers are given bellow-

Everyone has the right to a standard of living adequate for the health and well-being of himself and of his family, including food, clothing, housing, medical care, necessary social services, and the right to security.”[1] Wages and benefits are one of the primary interests an employee may have, and unfortunately, disputes over the payment of wages and provision of benefits are not uncommon. There is a wide range of laws concerning wages and benefits, and this section provides information on employees’ legal rights on those issues including tips on overtime pay, employee health insurance, and retirement plans. All employees are entitled to be paid for the work they have done. They are also entitled to be paid if they are ready and willing to work but their employer has not provided them with any work to do, unless your employment contract says otherwise. If you’re an employee, you’re entitled to be paid if you can’t work because you are off sick or away from work on maternity leave, paternity leave or adoption leave, or parental leave. You are also allowed a certain number of days paid holiday a year. In most of these situations, you are entitled to your usual wage whilst off work. There are some exceptions to these rules. For example, parents on maternity leave, paternity or adoption leave, or parental leave, are entitled to a certain amount of paid leave but the law sets out the rate at which this must be paid and it may not be as much as their usual wage. If you are employee on sick pay, your contract may give you less pay than your normal pay. By law, most employees are entitled to the legal minimum statutory sick pay. Your contract may give you more pay than this.

You may be entitled to unpaid time off work in other circumstances, for example, in a family emergency or on jury service. Any amount of wages on top of the national minimum given by law, or the amount of wages for workers who are not covered by the national minimum wage, depends on the worker’s individual contract of employment. Employers must not discriminate in the amount that they pay their workers, for example, by paying black workers less than white workers who are doing the same job, or by paying women less than men when they are doing work of equal value. This is known as ‘equal pay’.[2] Workers in the UK aged 16 or over are legally entitled to a national minimum hourly wage. It does not matter where they work, the size of the firm or the worker’s occupation. This includes casual laborers, agency workers, and home workers, workers on short-term contracts and workers employed by subcontractors.[3]

Right to leaves and Holidays