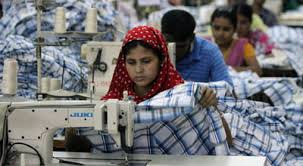 The tremendous success of readymade garment exports from Bangladesh over the last two decades has surpassed the most optimistic expectations. Today the apparel export sector is a multi-billion-dollar manufacturing and export industry in the country. The overall impact of the readymade garment exports is certainly one of the most significant social and economic developments in contemporary Bangladesh. With over one and a half million women workers employed in semi-skilled and skilled jobs producing clothing for exports, the development of the apparel export industry has had far-reaching implications for the society and economy of Bangladesh. The economy of Bangladesh is largely dependent on agriculture. However, in recent years, the Ready Made Garments (RMG) sector has emerged as the biggest earner of foreign currency. The RMG sector has experienced an exponential growth since the 1980s. The sector contributes significantly to the GDP. It also provides employment to around 2 million Bangladeshis. An overwhelming number of workers in this sector are women. This has affected the social status of many women coming from low income families.

The Bangladesh Garment Industry for Bangladesh, the readymade garment export industry has been the proverbial goose that lays the golden eggs for over fifteen years now. The sector now dominates the modern economy in export earnings, secondary impact and employment generated. The events in 1998 serve to highlight the vulnerability of this industry to both internal and external shocks on the demand and supply side. Given the dominance of the sector in the overall modern economy of Bangladesh, this vulnerability should be a matter of some concern to the policymakers in Bangladesh. Although in gross terms the sector’s contributions to the country’s export earnings is more than 80% percent, in net terms the share would be much less partially because the backward linkages in textile have been slow to develop. The dependence on a single sector, no matter how resilient or sturdy that sector is, is a matter of policy concern. We believe the policymakers in Bangladesh should work to reduce this dependence by moving quickly to develop the other export industries using the lessons learned from the success of apparel exports. Support for the apparel sector should not be reduced. In fact, another way to reduce the vulnerability is to diversify the product and the market mix. It is heartening to observe that the knit products are rapidly gaining share in overall garment exports as these products are sold in quota-free markets and reflect the strength of Bangladeshi producers in the fully competitive global apparel markets. Preliminary data and informal evidence indicate that this sector seems to have weathered the devastating floods relatively well. The industry is one hundred percent export-oriented and therefore insulated from domestic demand shocks; however, it remains vulnerable to domestic supply shocks and the smooth functioning of the banking, transportation and other forward and backward linkage sectors of the economy. The Dhaka-Chittagong road remains the main transportation link connecting the production units, mostly situated in and around Dhaka and the port in Chittagong, where the raw material and the finished products are shipped in and out. Despite increased dependence on air transportation, trucks remain the main vehicles for transporting raw materials and finished products for Bangladesh garment exports. The floods disrupted the normal flow of traffic on this road. Eventually, this road link was completely severed for several days when large sections of the road went under water for a few weeks during the latter phase of the floods. This delinking of the road connection between Dhaka and the port in Chittagong was as serious a threat as one can imagine for the garment exporters. The industry responded by calling upon the Bangladesh navy to help with trawlers and renting a plane from Thai Air that was used to directly fly garment consignments from the Dhaka airport to the Chittagong airport several times a day.

COMPARATIVE STATEMENT ON EXPORT OF RMG AND TOTAL EXPORT OF BANGLADESH

Growth of the industry and Employment

Contribution of the RMG Industry

RMG business started in the late 70s as a negligible non-traditional sector with a narrow export base and by the year 1983 it emerged as a promising export earning sector; presently it contributes around 75 percent of the total export earnings. Over the past one and half decade, RMG export earnings have increased by more than 8 times with an exceptional growth rate of 16.5 percent per annum. In FY06, earnings reached about 8 billion USD, which was only less than a billion USD in FY91. Excepting FY02, the industry registered significant positive growth throughout this period.

In terms of GDP, RMG’s contribution is highly remarkable; it reaches 13 percent of GDP which was only about 3 percent in FY91. This is a clear indication of the industry’s contribution to the overall economy. It also plays a pivotal role to promote the development of other key sectors of the economy like banking, insurance, shipping, hotel, tourism, road transportation, railway container services, etc.

A 1999 study found the industry supporting approximately USD 2.0 billion worth of economic activities (Bhattacharya and Rahman), when the value of exports stood at a little over USD 4.0 billion.

One of the key advantages of the RMG industry is its cheap labor force, which provides a competitive edge over its competitors. The sector has created jobs for about two million people of which 70 percent are women who mostly come from rural areas. The sector opened up employment opportunities for many more individuals through direct and indirect economic activities, which eventually helps the country’s social development, woman empowerment and poverty alleviation.

The Ready-Made Garments (RMG) industry occupies a unique position in the Bangladesh economy. It is the largest exporting industry in Bangladesh, which experienced phenomenal growth during the last 20 years. By taking advantage of an insulated market under the provision of Multi Fibre Agreement (MFA) of GATT, it attained a high profile in terms of foreign exchange earnings, exports, industrialization and contribution to GDP within a short span of time. The industry plays a key role in employment generation and in the provision of income to the poor. Nearly two million workers are directly and more than ten million inhabitants are indirectly associated with the industry. Over the past twenty years, the number of manufacturing units has grown from 180 to over 3600. The sector has also played a significant role in the socio- economic development of the country. The Agreement on Textile and Clothing (ATC) introduced in 1994, aimed at bringing textiles and clothing within the domain of WTO rules by abolishing all quotas by the end of 2004. It provides an adjustment period of 10 years, so that countries affected by the MFA could take the necessary steps to adjust to the new trading environment. Liberalization of trade following the Uruguay Round agreement presents opportunities as well as challenges for a developing country like Bangladesh in RMG sector. In the Post-Uruguay Round period, traditional instruments of trade policy such as tariffs, quotas, and subsidies will become less feasible and less relevant. In a liberalized trade regime, competition among textiles and clothing exporting countries is likely to become intense. The objective of this paper is to identify the prospects of RMG industry after the MFA phase out by analyzing the current scenario along with different policy measures and the available options in order to be more competitive in the new regime. The export made by Garments Industries of Bangladesh is improving year after year except some of the year. Strike, layout, shutdown of company, political problem, economic problem, inflation etc. are the prime cause of decreasing export in this important sector. But above it, Readymade Garments Industries is the leading sector in export sector.