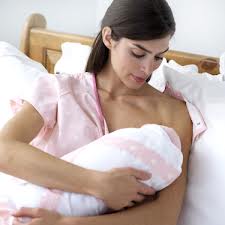 Exclusive breastfeeding in the first six months of life stimulates babies’ immune systems and protects them from diarrhoea and acute respiratory infections – two of the major causes of infant mortality in the developing world and improves their responses to vaccination. Particularly in unhygienic conditions, however, breastmilk substitutes carry a high risk of infection and can be fatal in infants. Yet only slightly more than one third of all infants in developing countries are exclusively breastfed for the first six months of life.(40)

1.4: Initiation and Age pattern of Breastfeeding:
UNICEF and WHO recommend that children be fed colostrums immediately after birth and continue to be exclusively breastfed even if the regular breast milk has not yet come down. Early breast feeding increases the changes of breast feeding success and generally lengthens the duration of breastfeeding. Early initiations of breastfeeding also encourage bonding between the mother and newborn and it helps to maintain the baby’s body temperature.
For optimal growth it is recommended that infants should be exclusively breasted for the first six months of life. Exclusive breastfeeding is the early months of life is correlated strongly with increased child survival and reduced risk of morbidity, particularly from diarrhoeal disease (42).
The Canadian Pediatric Society recommends exclusive breastfeeding for the first six months of life for healthy, term infants. Breast milk is the optimal food for infants, and breastfeeding may continue for up to two years and beyond. This recommendation, proposed by the CPS Nutrition Committee and adopted by the Board of Directors in March 2005, extends the duration of exclusive breastfeeding from the former range of four to six months (88). It is also consistent with recently published recommendations from Health Canada and the American Academy of Pediatrics Section on Breastfeeding. These changes follow the World Health Organization’s 2001 recommendation that exclusive breastfeeding continue for six months.(89,90,91) The WHO defines exclusive breastfeeding as the practice of feeding only breast milk (including expressed breast milk) and allows the baby to receive vitamins, minerals or medicine. Water, breast milk substitutes, other liquids and solid foods are excluded. (92)
The reasons behind the new recommendation include strong protective effects for infant gastrointestinal infection, prolonged lactational amenorrhea and increased post-partum weight loss in mothers. There were concerns that this recommendation could result in iron deficiency, other micronutrient deficiencies and growth faltering in susceptible infants. These concerns were directed particularly at populations where maternal nutrition was suspect, and infants had high rates of iron, zinc and vitamin A deficiency. However, an 8% global increase in exclusive breastfeeding to six months is estimated to have reduced infant mortality by 1,000,000, decreased fertility by 600,000, and saved countries billions of dollars in unneeded breast milk substitutes (93). While the data for benefit in industrialized countries is limited, it does exist (94, 95). Nutrient-rich complementary foods, with particular attention to iron, should be introduced at six months. Breastfed babies should also receive a daily vitamin D supplement until their diet provides a reliable source or until they reach one year of age. (96, 97)

1.5: Benefits of breastfeeding:
Once thought to be “no longer worth the bother” (43), breastfeeding has been rediscovered by modern science as a means to save lives, reduce illness, and protect the environment. Policy makers are increasingly recognizing that breastfeeding promotion efforts can reduce healthcare costs and enhance maternal and infant well-being. (44, 45, 46)
The current recommendation is that infants be exclusively breastfed for approximately the first six months of life and that breastfeeding be continued, complemented by appropriate introduction of other foods, well past the first year of life and as long as both mother and infant wish(47,48). The National Health Promotion and Disease Prevention objectives call for an increase to at least 75% of the proportion of mothers who initiate breastfeeding and to increase to at least 50% the portion who continue to breastfeed until their infants are six months old(46,49).
With the extensive research now available on the benefits of breast milk and the risks of artificial milks, physicians need to be able to support their breastfeeding patients. Unfortunately most physicians currently in practice have had little to no education in breastfeeding physiology and clinical management. Well researched basic principles and guidelines exist, in addition to well educated lactation professionals and mother-to mother resources, to help the physician help his or her patients.

1.5.1: Importance of breastfeeding for infants:
Human milk is uniquely suited for human infants:
• Human milk is easy to digest and contains all the nutrients that babies need in the early months of life.(50)
• Human milk contains special enzymes to optimally digest and absorb the nutrients in the milk before infants are capable of producing these enzymes themselves.(51)
• Breast milk contains multiple growth and maturation factors.(51)
• Factors in breast milk protect infants from a wide variety of illnesses.(49)
• Breast milk contains antibodies specific to illnesses encountered by each mother and baby.(51)
• Research suggests that fatty acids, unique to human milk, play a role in optimal infant brain and visual development.(52)
• In several large studies, children who had been breastfed had a small advantage over those who had been artificially fed when given a variety of cognitive and neurological tests, including measures of IQ.(53)
Breastfeeding saves lives:
• Lack of breastfeeding is a risk factor for sudden infant death syndrome (SIDS).(54)
• Human milk seems to protect the premature infants from life-threatening gastrointestinal disease and other illnesses.(51,55)
Breastfed infants are healthier:
• Infants who are exclusively breastfed for at least four months are half as likely as artificially fed infants to have ear infections in the first year of life.(56,57,58,59)
• Breastfeeding reduces the incidence and lessens the severity of bacterial infections such as meningitis, lower respiratory infections, bacterium and urinary tract infections in infants.(57,58,59,60,61)
• Breastfeeding is protective against infant botulism.(62)
• Breastfeeding reduces the risk of “baby-bottle tooth decay” in infants.(63)
• Breastfed infants are less likely to have diarrhea.(57,59)
• Evidence suggests that exclusive breastfeeding for at least two months protects susceptible children from Type I insulin dependent diabetes mellitus (IDDM).(64,65)
• Breastfeeding may reduce the risk of subsequent inflammatory bowel disease and childhood lymphoma.(86)
• Breastfeeding confers some protection against allergy.(66,67)
• New research suggests that older children and adults who were breastfed as infants, are likely to have less adult illnesses such as heart disease, stroke, hypertension and auto-immune diseases.(68)

1.6: Mortality, Morbidity and breastfeeding:
Breastfeeding promotion is a key child survival strategy. Although there is an extensive scientific basis for its impact on post neonatal mortality, evidence is sparse for its impact on neonatal mortality.
The child survival revolution of the 1980s led to dramatic reductions in overall child mortality, it had little impact on neonatal mortality. In 2002, 4 million infants died during the first month of life, and neonatal deaths now account for 36% of deaths among children Breastfeeding was initiated within the first day of birth in 71% of infants and by the end of day 3 in all but 1.3% of them; 70% were exclusively breastfed during the neonatal period. The risk of neonatal death was fourfold higher in children given milk-based fluids or solids in addition to breast milk. There was a marked dose response of increasing risk of neonatal mortality with increasing delay in initiation of breastfeeding from 1 hour to day 7; overall late initiation (after day 1) was associated with a 2.4-fold increase in risk. The size of this effect was similar when the model was refitted excluding infants at high risk of death or when deaths during the first week were excluded.
Promotion of early initiation of breastfeeding has the potential to make a major contribution to the achievement of the child survival millennium development goal; 16% of neonatal deaths could be saved if all infants were breastfed from day 1 and 22% if breastfeeding started within the first hour. Breastfeeding-promotion programs should emphasize early initiation as well as exclusive breastfeeding. (87)

1.10: General Objectives:
1. To assess the determinants of exclusive feeding in infants (0-6 months).

2.1: Study design:
Hospital based Case-control study was conducted in ICMH, DSH, ICDDR,B for the available breastfeed mothers who came for treatment of their infants in those hospital.

The study population was breastfed mother who had 0-6 months infant.

• Qualitative data collection:
The data was collected through individual interview. Information of socio-economic condition, feeding practice, history of disease, awareness about breastfeeding and complementary feeding of the mothers infant was collected through direct questionnaire.
2.10: Data Entry & Analysis:-
After completing the study, coded data were entered in to SPSS software. Consistency, validity and accuracy of data entry were checked and cleaned using the validation program. Analysis had done using standard statistical software (SPSS). Statistical test was selected for checking the distribution of the variables. T-test was done for comparison of two data points among the same subjects. X2-test was used to test the difference in proportion between groups. Cross tabulation was used for description of data.

Educational attainment of the mothers is represented in table 1. For convenience, the academic qualification is divided in two categories namely illiterate and educated. Educational attainment of the mothers shows: 17.8% of mother illiterate and 82.2% was educated feed their infants exclusively. On the other side 26.7% illiterate and 73.3% were educated mothers feed their infants non-exclusively. There was no significant difference between EBF and Non-EFB mother’s education level.

4.2: Limitation:
At the time of conducting the survey we had to face the difficulties. The Limitations of the study are given bellow:

1. As we selected three hospitals in order to collect data from mothers who came for treatment their infants and all of the infants were sick.

2. When we collected 24-hour recall data on dietary intake, most of mothers unable to provide accurate information.

3. Some mothers did not want spend sufficient time with us due to her work load and some were shy of talking to us.

4. Most of the mothers did not agree directly with their misconception.

5. In some cases few mothers were very much at hurry due to cry of their infants and which delayed the work.

Every year In Bangladesh, more than two third of children are died infectious diseases, such as diarrhea and most of them age are less than 1 year and BF is the prevention of this infectious diseases. In our study we found that those infants born in high economic status families had higher risk of stopping breast-feeding compared to those of low economic status families.