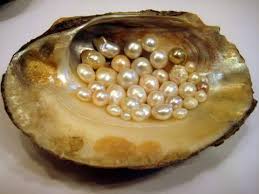 Mussels are important to both man and the environment. In one hand, they are filter feeders and act as natural water cleaner and indicators of water quality conditions. On the other hand, they are edible food to both human and animals.

Shell is the primary raw material for the button industries. It can be used as nuclei for pearl culture, jewelry, and crafts and animal food additive.

Pearl is the precious gem, which is one of the most attractive objects of adoration. Pearl powder contains 17 amino acids and many mineral elements; it can be used as nutrient and medicine, which is useful in treating various viz. heart disease, sore throat, heart burn, eye disease etc. pearl powder can also be used as a vital content of skin protection cream.

In order to undertake the culture of pearls, there are four necessary requirements: a culture area, mussels, instruments and irritants or nuclei.

The site where the mussels will culture in a pond. In Bangladesh most facilities own ponds near their dwellings and these ponds are good sites for culturing pearls. There are two genera of pearl mussels in Bangladesh: Lamellidens and Perreysia. The mussels are commonly called “Jhinuk” a term applying to various shell types. The one used for pearl culture should be Lamellidens marginalis, for two reasons. First, due to its size (the mature ones range from 7 to 10 cm, measured from anterior to posterior end), it is suitable to operate on. Perreysia are smaller so they would be difficult to operate on. Second, they are common in most inland bodies of water.

To operate on the mussels for culturing pearls, the following special instruments are needed:

With the use of nuclei or irritants, the pearls can be produced in a shorter culture period as they start from larger material than is naturally found. The best material for nuclei would be made of shell as it has the same composition as that of pearls. For the culture of pearls, substitute material can be used. Round beads made of ceramic are available at factories in Dhaka. The size should range from 2 to 4 mm for the average local mussel and not any larger. Ceramic is a good substitute nuclei as it has almost the same weight as that of a pearl.

Other materials, such as sand can also be used. The smooth type of sand should be selected. Round objects for nuclei can also be formed out of either ordinary or white cement. When using these they should first be thoroughly dried for several days.

For our production we need water, gas, fuel and electricity.

Water is important element in this farm. It is used in various ways, production process and other accessory task.

Gas is used to make food for farm’s workers.

Electricity is used in the production unit, office and accommodation of the factory workers.

Fuel is used for transportation.

3.6 Supplies and Sources of Raw Materials

Pearl Oysters are collected from a species of freshwater mussels which are found in abundance in inland bodies of water such as lakes, rivers, ponds and dams in Bangladesh. The river gypsies, people who live in houseboats, collect them. We collected pearl oyster from those peoples.

We collected young fishes from different fisheries in Bangladesh.

The products provided by us:

Shell flesh using as food for fisheries and poultry.

To operate on the mussels for culturing pearls, the following special instruments are needed:

Shell Opener: Made of stainless steel. When the handle is pressed, the end opens. This is used to pry open the shells of mussels and prevent them from closing prior to the introduction of nuclei and grafts.

Graft Cutter/Knife: Made of flat stainless steel and used in the preparation of graft tissues made from the mantle of the mussel.

Incision Knife: Made of stainless steel with a plastic handle. It has a rounded, flat sharp tip which is used to make slits on the gonad, through which the nucleus and graft tissues are inserted.

Nucleus Carrier/Lifter: Similar to the incision knife except that the tip is cup-shaped. It is used to carry or lift a piece of nucleus/irritant for insertion into the gonad. In doing so, the tip should first be wet with water, which due to surface tension (a physical property of water), will enable the instrument to lift the nucleus.

Graft Carrier/Lifter: Also similar to that of the incision knife and nucleus lifter except that the tip is pointed. By pricking and lifting a piece of the mantle tissue, it is used to insert the tissue inside the gonad.

Spatula with a hook: Made of stainless steel with a flat end. It is used to lift the gills of a mussel to allow an unobstructed view of the body prior to the operation. The hook is used to hold the foot when making an incision during the operation.

Mussel Holder: A wooden block (10 × 10 × 18 cm) with a large ordinary paper clip fitted on the end. This holds the mussel to be operated on in place.

Pinchers: An ordinary pincher which is used in the preparation of graft tissues, as in picking up the cut/detached mantle from the mussel.

Wooden Peg: Made of wood (an ordinary pencil cut to size) 0.7 cm in dia and 3.5 cm long. It is placed between the shells of the mussel, after it has been opened by the shell opener, to prevent the shells from closing during the operation.

Miscellaneous Equipment: Other items needed during the operation include basins, trays, rubber sponges, dishes and bowls.

For fixing the operated mussels, the following materials are used:

Operated mussels can be held in the net bag, net cage and net folder then they can be hanged with plastic ropes.

One net bag can hold 2-3 mussels, material of which may be polyvinyl chloride (PVC) . The bag should be fixed with the plastic rope, which is the popular system in pearl culture.

Net cage may be different shaped and can be made of net and bamboo ring in which 2-3 mussels can be held. Then the cage should be fixed with the plastic rope for operated mussel culture.

Net folder can be made of net and wooden or iron frame, with one row or several rows of pocket. One mussel can be kept in one pocket, and then the folder should be fixed with the plastic rope. This system is suitable for nuclei pearl culture and image pearl culture, because it can keep mussel’s ventral margin upward, promote wound recovery and prevent the nuclei out of the wounds.

There are two methods of operating on mussels described in this manual which are applicable to the local freshwater mussels. They are the operations using the gonad for round pearls and the use of the mantle for seed pearls.

The mussel to be used as graft should be properly selected; it should be young and healthy. The two mantles of one mussel will be sufficient for use in operating on 10 to 15 mussels.

To prepare the graft tissues, one mussel will be opened to remove its mantles. This can be done by slipping the pointed, narrower end of the graft knife between the shells to cut the adductor muscles (anterior and posterior). With the shells widely opened, the two mantles can then be cut and separated from the body of the mussel and placed on a wooden board. The slimy fluid on the mantle should be wiped off with a wet synthetic sponge. They should be divided into long strips by cutting or eliminating the outer margin of the mantles which produce the prismatic layer of the shells. They are then cut into 2 to 4 mm squares and are ready for use as graft tissues.

Culture of Pearl on the Mantle

Pearls can be grown on the mantle of the mussels. This method has been practised in China and Japan using their freshwater mussels (Anodonta sp. Cristaria plicata). Only pieces of graft tissues were inserted between the layers of the mantle, without any nucleus or irritant. The graft tissue will easily become attached to the mantle, while a nucleus if inserted will be expelled.

The following is the procedure for operating on the mantle of mussels for seed pearls:

First, the graft tissues should be prepared (the same way as when used in the operation of the gonad). Insert the end of the shell opener into the gaping mussel to make a 7 mm opening. Insert a wooden peg between the shells to prevent them from closing and remove the shell opener. Place the mussel in a holder. With the use of a spatula, push the gills upward for a clear view of the lower mantle lobe. Then, with the use of the incision knife, make slits on the mantle, taking extra care not to cut through the other side. The mantles are usually bulging due to the presence of a watery fluid, so when slit, fluid will ooze out. Two to three slits can be made on the mantle. Using the graft carrier, insert one mantle tissue in each of the slits. Turn the mussel in the holder upsidedown so that the other mantle can be operated on. Repeat the procedure for this mantle.

The graft tissue will join with the inner epithelial cells or with the connective tissue between the external and the internal epithelial cells of the mantle. This will have the same function as when it is part of the mantle, and will therefore secrete the shell substance or calcium carbonate and eventually result in seed pearls. In China and Japan, the seed pearls grown on the mantle are commonly called rice pearls due to their rice-like shape.