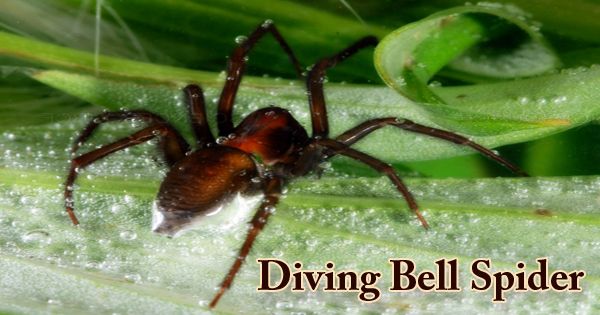 The diving bell spider or water spider (Argyroneta aquatica), a species of spider known as a flexible diving bell, is known for its underwater silk web. It is the only spider species known to live almost entirely underwater; it is the only member of the Argyroneta genus. People used to discover the underwater world with the help of diving bells in the days before scuba tanks. These wide open-bottomed chambers were lowered into the water and the oxygen trapped within them was used by divers to breathe. Bells have been around since at least the time of Aristotle, but the diving bell spider has been using similar structures for much longer in the rivers and lakes of Europe.

The only species of spider known to spend its entire life underwater is the water spider. It has been placed in the Argyronetidae family, but fossil spider studies indicate that it may be more closely related to members of the Cybaeidae family. The spider varies in color from mid to dark brown when out of the water, even though the hair on the abdomen gives it a dark grey, velvet-like look. It is native to Europe and Asia’s freshwater ecosystems. Interestingly, all the characteristics of a standard terrestrial spider are present in the diving bell spider, but it is known to live underwater continuously, thus its unofficial name. In reality, diving bell spiders are so good at surviving underwater that they only have to come up for air once a day on the surface of the water. 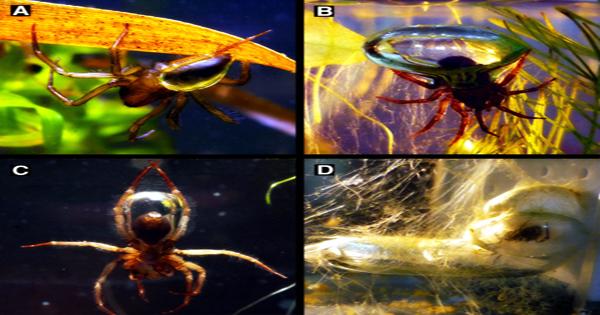 In ponds, slow-moving streams, and other shallow bodies of freshwater, particularly where aquatic vegetation is abundant, water spiders are found. Female spiders range between 7.8 and 13.1 mm, while male spiders range between 7.8 and 18.7 mm in length. When looking for mates and hunting, the greater body size of males is due to their propensity towards increased mobility. The diving bell spider has a black velvety abdomen and a brown cephalothorax on the outside of the bath. Because of the air bubble that covers its belly, it has a silvery appearance underwater. Fine hairs cover their legs and abdominals, which trap air bubbles in the water and give a shimmering, silvery look to the spiders.

The water spider’s abdomen is coated with feathers, like all other spiders, which the spider uses to trap an air bubble around its abdomen. Females have shorter chelicera, a shorter front leg pair, and a shorter body shape than males, which is what gives dominance to males diving over women. The diving bell spider also wants to breathe air, and through the construction of its own diving bell, it does so. Second, it spins a web between underwater plants that is dome-shaped. Then it rises to the surface and uses the fine hair on its legs and belly to catch bubbles. It brings them down and releases them into its web, eventually filling the dome with air. The spider has amassed a bubble so big that it can fit inside after a few journeys. The spider stays in captivity for two years or so.

Research has shown that when oxygen levels within the web become too low to draw oxygen from the water, the inflated web acts as a sort of gill, removing dissolved oxygen from the water. However, eventually, the inflated web collapses, and for bubble renewal, the spider must return to the water’s surface, which it does about once a day. The spider might live forever in its bubble if it were not for the fact that it appears to diffuse nitrogen out of it. This suggests that the bell shrinks finally. This is why the spider always has to regularly fly to the surface to top up its home and keep it from collapsing. Males are more involved and almost 30 percent larger on average than females, measuring 10-15 mm (0.39-0.59 in) compared to 12 mm (0.31-0.47 in head-and-body length. For spiders, where sexual dimorphism is typically in favor of larger females, this size difference favoring males is rare.

Below the water’s surface, much of the water spider’s life cycle, including courtship and mating, prey capture and feeding, and the development of eggs and embryos, takes place. Many of these operations take place inside the diving bell of the spider. For the vast majority of its life, the diving bell spider lives underwater. After diving down into the sea, it needs plants as attachment sites and as anchors for its “bubble nest”. In ponds and eutrophic lakes, marshes, slow-moving streams with relatively low pH water and dissolved oxygen concentration, as well as swamps, these spiders are found to live. 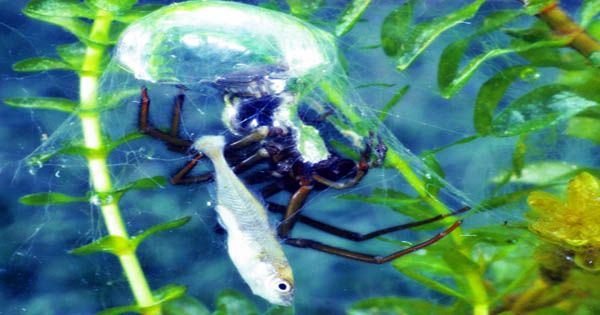 Theories say that the more aggressive hunting style of the male needs greater strength to overcome water resistance and counteract the buoyancy of their supplies of mobile air. This larger body size is often correlated with longer front legs, which have been shown to influence the ability to dive and to give the males dominance over the more sessile females in diving. The bite of the diving bell spider is understood to be very painful. It usually preys on crustaceans and aquatic insects (e.g., Daphnia and mosquito larvae). With the exception of its especially painful bite, there are no known adverse effects of the diving bell spider on humans. Frogs and fish fell victim to the spiders themselves. Human skin may be pierced by its fangs, which could theoretically cause fever and localized inflammation.

Male water spiders sometimes create their webs close to those of women and tunnel into the webs of the females to mate. A female can lay between 30 and 70 eggs suspended from the upper region of the female’s web, which are secured within a cocoon. Within several weeks, the eggs hatch, and the spiderlings scatter into the water. Until building their own webs, young water spiders frequently make use of empty snail shells and similar habitats, which they fill with air. Most species of spiders are known to live on land, as we may already know, but this one (along with a few others) spends most of its life underwater.