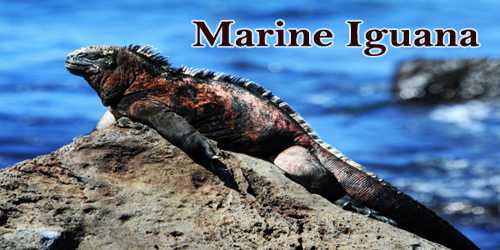 Also known as the sea iguana, saltwater iguana, or Galápagos marine iguana, the marine iguana (Amblyrhynchus cristatus) is the only lizard on earth that spends time in the ocean. It is an iguana species known only on the islands of the Galápagos (Ecuador). Special among modern lizards, it is a marine reptile with the ability to forage algae in the water, which makes up nearly all of its diet. These lizards live only on the Galapagos Islands and have adapted to the island lifestyle, like many Galapagos species. Populations have been separated from each other throughout the archipelago for so long that each island has its own subspecies.

Right, with their wide-set eyes, smashed-in noses, spiky dorsal scales, and knotty, salt-encrusted heads, they aren’t pretty. But their impressive and special evolutionary adaptations make up for what these rare creatures lack in appearances. Large males are able to dive to search out this food source, while females and smaller males feed during tide within the intertidal zone. They live primarily on rocky shores in colonies where they relax after visiting the relatively cold water or intertidal zone, but they can also be seen in marshes, mangroves, and beaches. 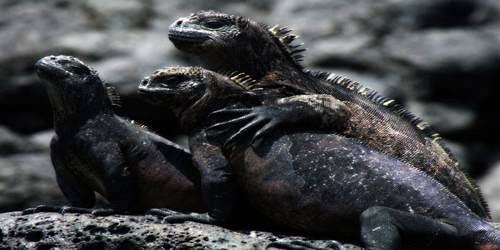 Marine iguanas are most noted for their ability to enclose shallow, marine waters. they’re herbivores and eat marine algae growing along rocky shores and underwater. Large males defend territories for a brief period, but smaller males produce other breeding strategies. The female digs a nest hole in the soil after mating, where she lays her eggs, leaving them to hatch a few months later on their own. In the sea, they swim with a snake-like motion and keep themselves against the floor with their long claws in order to graze. Marine iguanas are primarily terrestrial while they feed in the sea. They are often observed warming themselves in the sun, and they nest along the shore.

Scientists claim that land-dwelling iguanas from South America may have drifted out on logs or other debris to sea millions of years ago, finally settling on the Galápagos. Marine iguanas originated from that species and spread to almost all of the archipelago’s islands. Every island hosts unique scale, shape, and color of marine iguanas. Based on a study that relied on mtDNA, the marine iguana diverged from land iguanas some 8–10 million years ago, which is older than any of the extant Galápagos Islands. A more recent analysis that included both mtDNA and nDNA reveals that the two split around 4.5 million years ago, near the age of the oldest remaining islands of Galápagos (Española and San Cristóbal).

Also known for their very powerful salt glands are marine iguanas, where they “sneeze” out the salt. They drink a substantial amount of saltwater because they feed on underwater. They look fierce, but they are simply gentle herbivores, living solely on seaweed and aquatic algae. Their short, blunt snouts and tiny, razor-sharp teeth help them scrape the algae off rocks, and their laterally flattened tails allow them to move crocodile-like through the water. Their grips are long and sharp to stick to rocks in heavy currents onshore or underwater. After their forays into the frigid Galápagos seas, they have dark gray coloring to help absorb sunlight. And they also have unique glands that clean extra salt from their blood, which they consume when eating. 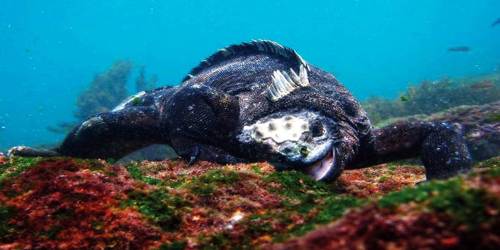 The marine iguanas were found hideous and gross by early tourists to the Galápagos Islands. English Royal Navy captain James Colnett wrote in 1798:

‘The iguanas are small, and of a sooty black, which, if possible, heightens their native ugliness. Indeed, so disgusting is their appearance that no one on board could be prevailed on, to take them as food.’

Charles Darwin was revolted by the presence of the animals on his visit to the islands in 1835, despite detailed observations of the creatures:

‘The black Lava rocks on the beach are frequented by large (2–3 ft (0.6–0.9 m)), most disgusting, clumsy Lizards. They are as black as the porous rocks over which they crawl & seek their prey from the Sea. Somebody calls them ‘imps of darkness’. They assuredly well become the land they inhabit.’

Marine iguanas must expel salt without expelling water in order to avoid dehydration, so they have specialized glands which remove salt from their blood. They also have amazing shrinking potential (in length and overall size). The maximum weight of adult males on Southern Isabella ranges from 12 kg (26 lb) to 1 kg (2.2 lb) on Genovesa. They can shrink by as much as 20 percent in times of decreased food availability, especially during El Niño climate events. Smaller people now need less food. When they return to high levels, their chosen algae quickly recover the lost scale. Female marine iguanas reach sexual maturity at 3–5 years of age while males reach sexual maturity at 6–8 years of age. The key steep and sudden decrease in bone growth cycle thickness is characterized by sexual maturity. The lifespan of marine iguanas is up to 60 years, but the average is 12 years or less.

Their population is not recognized very well. They are continuously under threat from non-native animals such as rodents, feral cats, and dogs that prey on their eggs and young people. Invasive species are very difficult to eliminate from islands, so this issue is likely to continue to affect populations of marine iguanas.