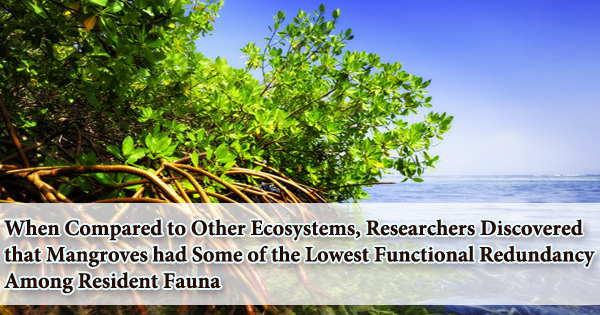 When Compared to Other Ecosystems, Researchers Discovered that Mangroves had Some of the Lowest Functional Redundancy Among Resident Fauna

Researchers gathered data on 209 crustaceans and 155 mollusc species from 16 different mangrove ecosystems across the world. They discovered that, when compared to other ecosystems, mangroves have the lowest functional redundancy among resident animals, implying that these coastal vegetations are among the most vulnerable ecosystems on the planet.

Mangrove forests were formerly common in the tropics, but they are now vanishing at alarming rates all across the world. Despite the fact that this endangered environment supports a diverse array of specialized invertebrates, little is known about the impact of mangrove destruction on the functional diversity and resilience of the local fauna.

The UNESCO-designated International Day for the Conservation of the Mangrove Ecosystem (also known as World Mangrove Day) is held every year on July 26th to raise awareness about the importance of mangrove ecosystems. Mangroves are more than simply trees; they constitute a unique, distinctive, and sensitive ecosystem when they come together. Their ecological function is dependent on the mutual interactions between their floral and faunal components, and a healthy community of invertebrates is required to keep a mangrove forest alive.

Dr. Stefano CANNICCI (Associate Director of the Swire Institute of Marine Marine Science and Associate Professor from the Research Division for Ecology and Biodiversity, The University of Hong Kong) and Professor Joe Shing Yip LEE (Professor and Director, Simon FS Li Marine Science Laboratory, School of Life Sciences, The Chinese University of Hong Kong) worked together to answer this question, which is critical in order to manage pristine mangroves and rehabilitate degraded ones.

They discovered that, when compared to other ecosystems, mangroves have the lowest functional redundancy among resident fauna, implying that these coastal vegetations are one of the world’s most vulnerable ecosystems in the face of recent anthropogenic alterations. As a result, a high functional redundancy provides a kind of ‘ecological insurance’ for a specific forest, because if one species becomes extinct, another can fill the void, keeping the ecosystem alive.

Diversity: The key to survival

These species were divided into 64 functional entities by the authors based on unique combinations of three functional features: eating patterns, behavioural traits that may impact ecosystem parameters, and micro-habitat. With the noteworthy exceptions of sites in South America, the eastern Indian Ocean, and the western Pacific Ocean, more than 60% of the locations exhibited no functional redundancy, meaning that most of the functional entities at those locations consisted of only one species.

On average, a single species performs 57 percent of the functional entities, implying that even a small local loss of invertebrate diversity could have significant negative consequences for mangrove functionality and resilience, because invertebrates are essential for mangrove nutrient cycling and oxygen provision to tree roots, and these functions will be lost if diversity is lost.

Furthermore, the minimal functional diversity of resident invertebrates suggests that mangroves are one of the world’s most vulnerable ecosystems. Nonetheless, certain tiny mangrove patches, such as those in Hong Kong and Mozambique, are home to multifunctional invertebrate assemblages that might act as biodiversity repositories, which could be important for future conservation efforts. Replanting mangrove trees is possible, but the local invertebrate population must organically recruit the newly replanted locations.

Mangroves will not be able to flourish without faunal recruitment owing to a lack of nutrients and oxygen in the soil. Large forests, such as those in Cameroon, on the other hand, were characterized by limited invertebrate functional diversity. The findings imply that faunal functional diversity, rather than the traditional indication of forest area, maybe a superior measure of mangrove resilience.

One of the most important takeaways from this study is that, despite their modest size, Hong Kong’s mangroves are extremely varied, and they are nevertheless home to a large number of species that serve various services in the environment. As a result, the mangroves in Hong Kong are the only remaining pure and natural mangroves in the Pearl River Delta, and they may serve as a source of populations that might help repopulate mangroves throughout mainland China.

The functional variety of resident faunal assemblages, according to the authors, is critical for estimating the vulnerability of mangrove forests to environmental change and devising appropriate management, conservation, and restoration programs. The health and resilience of mangrove forests across the world are now measured by their total area growth. This approach, on the other hand, ignores the woods’ true viability and utility.

A mangrove forest is more than simply a collection of trees; it’s a complex ecosystem that relies on healthy faunal populations and their interactions with the trees. Mangrove management and restoration initiatives must include not just the mangrove’s increased size, but also the stability and redundancy of its faunal component.